Preying on nostalgia is a marketing strategy that can bring piles of money. The golden age of remasters and remakes confirms that the time has come to monetize our fond memories. Meanwhile, somewhere in deep hiding, outside the mainstream, in niche and apparent oblivion exist the best genres that only the oldest players remember. I'll tell you today about VirtuaVerse – a pixelart point’n’click adventure in cyberpunk setting. 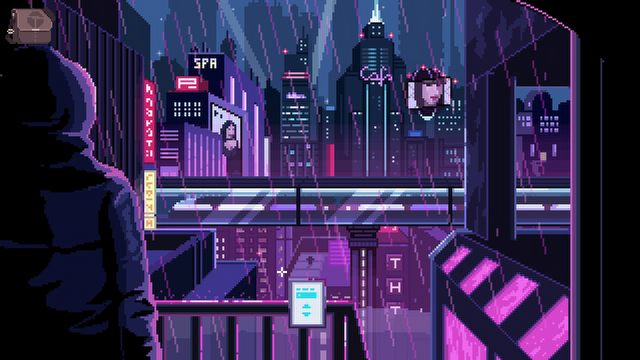 The world is hostile, but beautiful.

Remember 2011's Gemini Rue? The devs tried to take us back in time in quite uncompromising manner, and we were enabled to revisit beautiful memories. It's a bit like that with VirtuaVerse. It's a powerful, uncompromising and direct trip to the past. In fact, this game might as well been released in 1995. There's nothing here that you wouldn't have seen in the 1990s. Drawn backgrounds, no voice-acting, pixel-hunting, a typical point’n'click-adventure level of absurd puzzles, and a rather debatable causal sequence of events. The Theta Division studio responsible for the game invites you to this kind of fun. But does that mean you can wave VirtuaVerse off?

No, no, and absolutely not. Firstly, because retro gaming – though niche – is still sexy and finds its audience, and secondly, because it's a piece of astonishing pixel-art code and mesmerizing soundtrack. 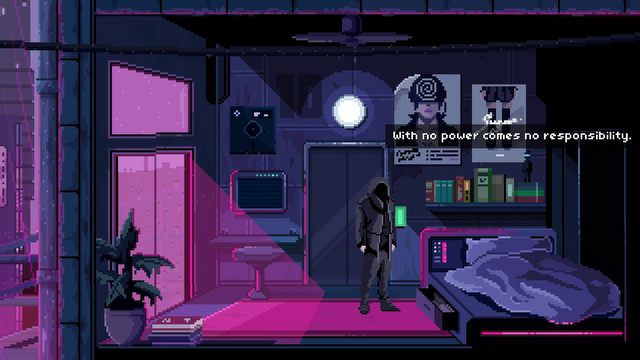 In the game, we play Nathan, a hardware engineer who wakes up in his apartment one not-so-lovely rainy day and notices that his girlfriend has disappeared. Behind the window, there's the dark future, only lit-up by the aggressive neon ads. It's one of those futures, where if the authorities don't become the Orwellian autocracy, the giant companies certainly will. Nathan, taken aback with the disappearance, goes on a quest to find his fiancée, in the process becoming caught up in the middle between hacker groups, retro demoscene, and dangerous technologies that may end the world. In other words: like in any other adventure about saving the world, you'll try to use the panties you've found on every item on the board to figure out how to push the plot forward.

Younger people don't remember, but the demoscene – or simply, the scene – was part of the gaming phenomenon in the 1990s and before. At the time, gaming was much more core, not yet open to flashy mainstream pop culture, and people often knew a ton about hardware and software. The phenomenon of demos was born in the 1980s by crackers breaking software security, including intros that appeared after launching the game. These intros were essentially the calling cards of software-cracking teams. Over time, the idea evolved into a separate branch of computer art. There were people who only specialized in creating demos, and they had their devotees and opponents. Certain computer mags wrote about the scene. The demos usually presented – using minimalist form – absolute pomp and exaggeration. They displayed the maximal skills of the creator in a few short frames. These were often fractal animations, bizarre, twisted, flashy animations of geometric pattern, with roaring 8-bit music. Demoscene exists to this day. You can learn more about it at scene.org.

Beauty of pixels and bits 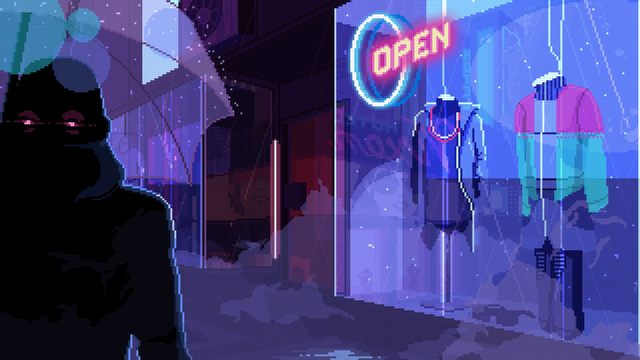 I'm not one of the biggest fan of pixel art, but VirtuaVerse deserves recognition. Darkness, dirt, technological advances, and aggressive marketing in augmented reality may not be a particularly revealing cyberpunk, but it is solid craft. Pixel art perfectly fits the established convention. Theta Division cartoonists emphasized both the punk and the cyber in backgrounds and characters. The rain, the night, the neon lights in the sky, the strange, suspicious silhouettes of rude people – it was all perfectly connected. During the journey, we will also visit diametrically different places – sunny tourist resorts, deserts, or snowy wastelands – so it's not just city grime. 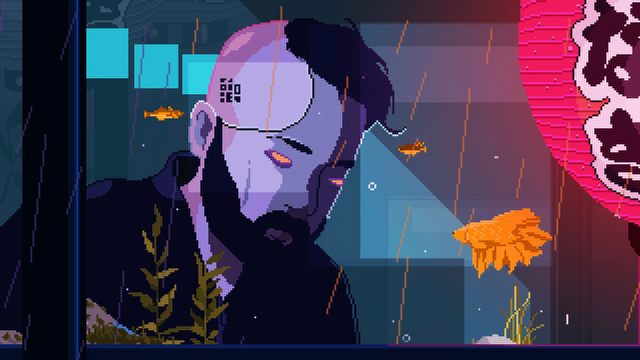 It is also impossible to overlook one of the main components of VirtuaVerse – the music. The game was released by Blood Music – and that's sort of funny, because the company publishes mostly music. The published, among others, the Emperor and, the much more apt in this case, Perturbator. Apparently, they thought that releasing a game was a great way to promote good music – and they thought it was good because the music created by Master Boot Record just blows the headphones up. It's a piece of great synthwave; a ton of metal tossed through electronic retro transistors. It's heavy and sultry, and retro. The Soundtrack fits perfectly the world drawn by artist under the moniker Valenberg. In terms of audiovisual setting, this is one of the best things you will see in indies of 2020.