Taking place on the eastern front of World War II, War Mongrels is a gritty real-time tactics game where you need to avoid the enemy’s sight and complete various missions throughout war-torn environments. Think Commandos but with an updated UI, controls, and settings that further see you killing Nazis in all sorts of ways.

To call it challenging would be an understatement – the game really makes you think before you make your next move. Its story is also one that explores the emotional scars of war and features a varied cast of heroes. It’s not all good, however, as some design choices and control schemes tarnish an otherwise solid addition to the genre.

War Mongrels follows the story of two German soldiers who are sent to a suicide mission as punishment, but manage to escape. Their journey eventually leads them to a the underground Polish Home Army, with whom they join forces to further take down enemy soldiers in their path and free the country from their oppressive occupiers. It’s what you would expect from a WWII plotline, but some animated cutscenes dive into what a character is thinking and further touch on the ramifications of being subjected to the horrors of genocide.

In addition to these moments of exposition, characters also frequently converse with each other during missions and you get to learn a little bit more about them and their personalities. The issue here is that while each character is unique and comes with his or her own skills and backstory, their voices don’t match the gravity of what they’re saying sometimes, and you often wonder why your German or Polish character doesn’t have an accent, while the Nazi guards do – despite how bad it sounds. 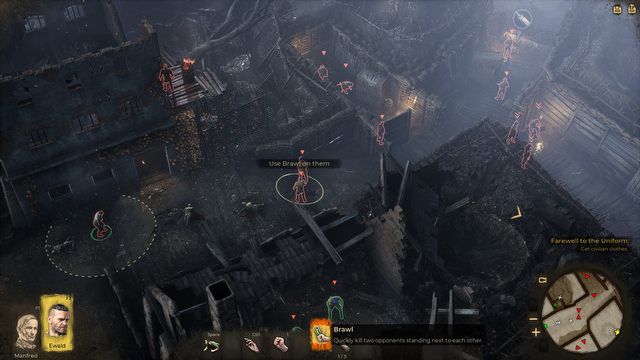 The choice to have your main characters speak English with little to no accent, but still have them say German words out of the blue feels off. It tarnishes some of the mood of certain scenes and also takes you away from the seriousness of the current climate. It’s even more upsetting enemy soldiers don’t know that a “w” is pronounced like a “v” auf Deutsch.

Everything else about its presentation is top notch, however, and you can really tell a lot of time was spent on ensuring its labyrinthine levels breathe a sense of dread and despair. Your environments are quite detailed and look pretty despite how bleak some areas tend to be. Even its soundtrack further adds to the game’s pensive theme and makes for great thinking music.

And yes, you will be doing a lot of thinking during each of the game’s missions because you essentially get a large map, an objective, and that’s it. At first, the game gives you some direction as to what you should do, but after you learn the ropes, you will be on your own to figure out how to get from point A to point B. This gives you the sense that you can play a mission any way you want, but can also make you overthink your approach and cause you to feel overwhelmed at times.

During a mission you will be able to control anything from one to a few characters by clicking on them or pressing their corresponding key. Each character has their own set of skills that help them distract guards by diverting or attracting attention. You can also make your characters silently take down an enemy with their weapon, or select their weapon to shoot them from distance – the latter of which is never a good idea considering how much attention it draws.

The objective of each mission is to remain unseen and unheard, or to quickly dispatch enemies before you get outnumbered and die. Because maps resemble environmental puzzles featuring guards that can instantly kill you, you will spend a lot of time planning your moves or trying different tactics, dying, and doing it all again until you succeed. Now, it may sound like a chore, but is actually the most rewarding part of the game as the feeling you get when you finally clear an area after hours of trying different things is truly one to remember. 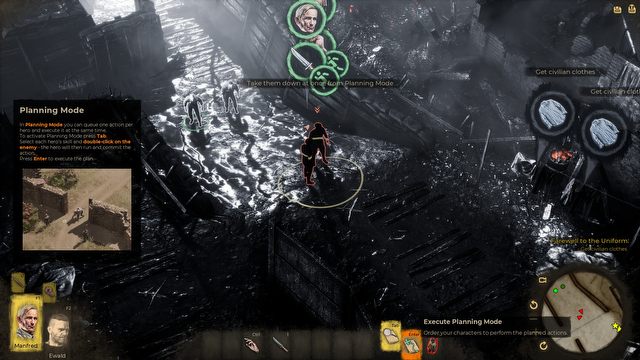 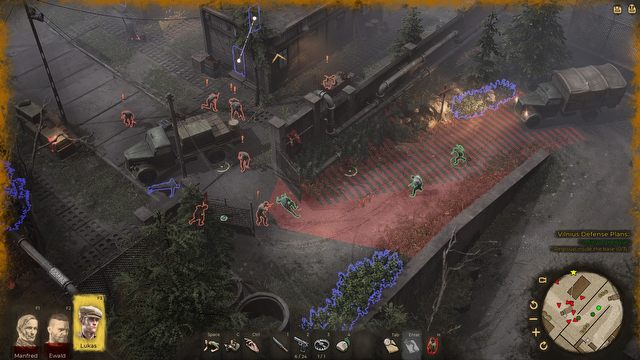 Not all missions give you the liberty to complete them how you want, but the paths you take, the number of guards and ways in which you kill them is totally up to you. This lets you use your characters’ unique skills to your advantage, so you can also experiment with different approaches. Maybe have Manfred whistle to lure a guard over to a bear trap you had Lukas drop in his path. Or distract a guard with Lead’s cigarettes and then throw one of Rubble’s knives at him from afar for a silent kill. Missions are linear in their objective, but you do have the ability to complete them as you please.

The annoying thing about simultaneously controlling multiple characters is that there are also a lot of controls and commands you need to master. It’s not a very smooth process to switch from one character to the next, and it’s also quite cumbersome to select your ability and click on an enemy only to realize you mis-clicked by a centimeter and now your character is just walking towards and enemy for him to get spotted. This happened a few times we thought we selected the right attack only to have our character stop what he was doing and just stand there forcing us to scramble and select the attack again.

You can also enter a “planning” mode and select actions for multiple characters to pull off at the same time. This is great when you want to ambush a small group of enemies, but it’s frustrating if these enemies are too close to each other as you won’t always be able to select the right guard you want. Or, your characters may bump into each other after you select their actions and essentially ruin your ambush causing you all to die.

War Mongrels tends to take advantage of your patience with its messy controls, irksome voice acting, and bugs that can lead to frustrating moments that make you want to stop playing. It’s rewarding when it works in your favor, but its rough edges will surely turn the fun into a struggle. 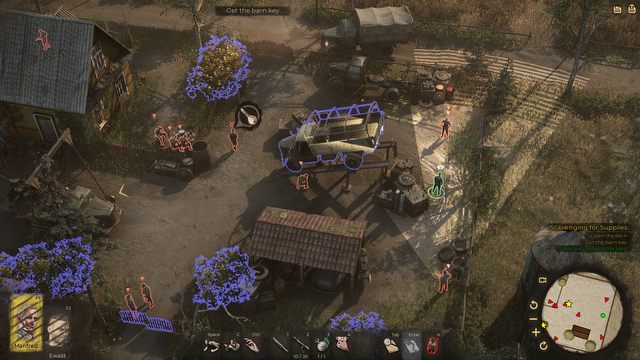 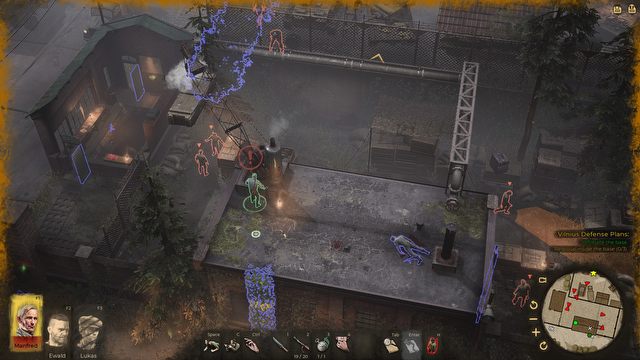 The saving system is also questionable as the game auto-saves before you die or get to a checkpoint, but it only gives you five auto-save slots. Hence, if you accidently approach a situation the wrong way, use up all of your saves and get stuck, you may need to load an earlier save slot or restart the chapter. It’s strange, too, that simply dying and reloading where you left off doesn’t reload the world and characters to their exact last position. Sometimes a guard will be spawned closer than you thought or sometimes you will luck out and it’ll work in your favor. It’s an odd system that caused us some headaches, though some players may enjoy this element randomness.

Missions can also be played online, but unless you are talking to your partner, the other player is bound to get you killed if you don’t coordinate your moves causing some added pressure you don’t need. The game is better played offline so you can really focus. Plus, online mode seems to have been an afterthought considering how simple and bare it feels. Join a game or host a game, and that’s it. 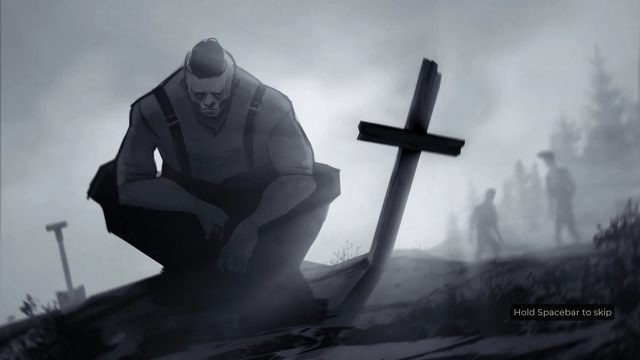 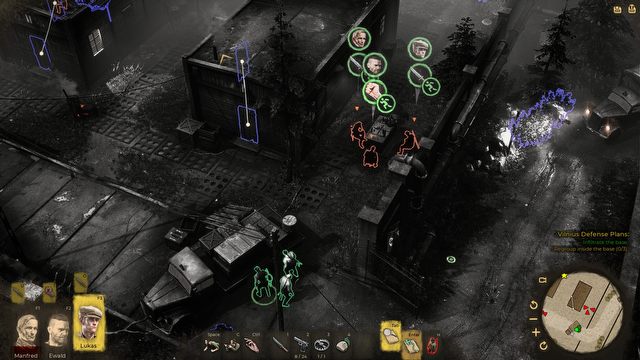 At its best, War Mongrels is a smart and challenging RTT game that really exercises your logic skills and makes you take a minute to gather your thoughts before acting on them – otherwise you die. And you will die often as you explore all of its fun features exploit your surroundings and character abilities.

Sadly, this RTT game also tends to take advantage of your patience with its messy controls, irksome voice acting, and bugs that can lead to frustrating moments that make you want to stop playing. It’s rewarding when it works in your favor, but its rough edges will surely turn the fun into a struggle.

According to our users, War Mongrels for PC was a disappointment - the expectations before the release were higher than the current average user score.