Werewolf: The Apocalypse - Heart of the Forest Game review

There are heaps of gripping fictional tales about vampires. That's understandable, as their mysterious and bloodthirsty nature make them an intriguing subject of pop-culture fascination. But when it comes to werewolves, there tend to be less "vicious" character studies or popular stories out there at all. That's what makes Werewolf: The Apocalypse – Heart of the Forest such an interesting prospect.

Thanks to its deep-seated RPG roots and insistence on adhering to some very staunch lore, this visual novel from developer Different Tales will sink its fangs into you and refuse to let go until the bitter end. Fans of both source material Werewolf: The Apocalypse and Vampire: The Masquerade series should find plenty to love here.

Howling at the moon 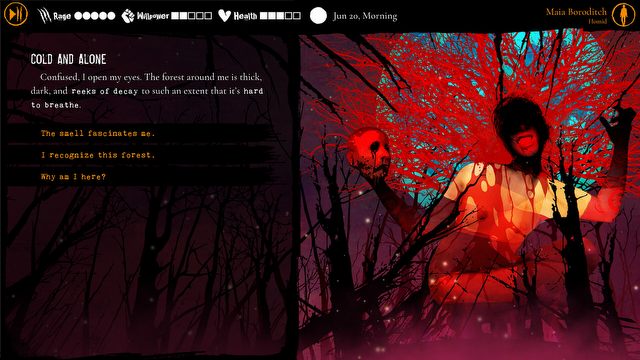 Your journey begins as you take on the role of Maia Boroditch, a woman who finds herself often dealing with visions of the forest. She feels a strange calling to Poland, where her family is from, and so she returns there to study her past and her heritage.

As such, she takes to the old-growth forest with a trusted friend named Anya by her side. They're joined by a group of ancillary characters like tourist Daniel as well as a common acquaintance, Bartek, as they infiltrate the forest seeking the answers Maia has been looking for. From there – as it always does – a series of eerie occurrences begins to take shape and things get decidedly uncomfortable.

The White Tower forest is one of the last primeval forests in Europe, and as such is a mythical place positively teeming with secrets and puzzles. It's an excellent setting for the game, especially with the real-world legend of Kazan the Wolf having colored the story. I appreciated learning about these spots in Poland, a location I had previously known so little about, so this was a treat to delve into and understand some of the lore.

All the puzzle pieces are in place for an exciting narrative crafted with the excellence of the Werewolf: The Apocalypse RPG series, and they flawlessly compose with the story beats presented to you at the beginning of the game. But it should be emphasized that this is a visual novel, and that means it's extremely text-heavy. That will undoubtedly end up turning some off, but for those able to get past it, book worms and otherwise, it's a practical godsend.

With that said, it's not as if you're reading a massive tome with no images or interactions with the game. Werewolf: The Apocalypse – Heart of the Forest is also rife with some striking illustrations that will haunt you long after you finish your play through. You'll absolutely get a peek at what's going on in the story, don't worry about that – it's not all walls of text blurring together. Each set of passages is accompanied by a splash of gothic horror, which does an excellent job of helping to move the story along.

A series of horrific visions 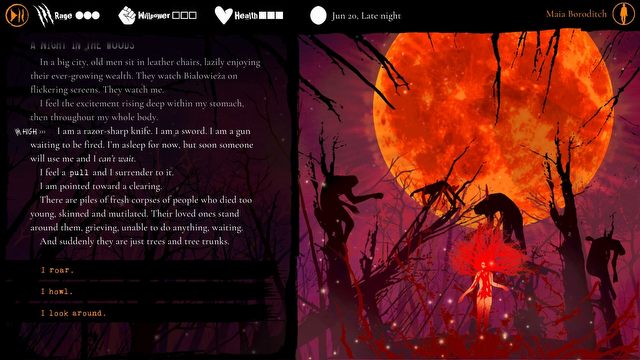 In-between reading lengthy passages of very well-written text and gazing upon the darker, beautifully detailed artwork, there are occasionally things you'll need to interact with as well. Don't think this is just as passive an experience as reading a book. There are several important factors you need to take into account while playing, especially when it comes to the in-game stats you must keep an eye on. These will essentially govern the types of actions and decisions you can take.

Speaking of decisions, you will end up shaping the type of person Maia becomes over the course of the game. This is much like the decision trees you'll see in games like Mass Effect. Whatever you choose over the course of the game will end up changing Maia's relationships, but those actions are altered by special stats called Rage and Willpower. The higher your Rage stat, the more beholden you'll be to make "aggressive" choices. As it decreases, Maia becomes more afraid, increasingly inclined to make decisions that are less rash and more emotional.

It can be a bit difficult to decide which decision to make, since straddling the line between low and high Rage stats can be a challenging dance to keep an eye on. There’s also another resource: Willpower, which helps you to make more difficult decisions. It can be hard to conserve depending on the actions you take as well, and if you accidentally use it all up, decisions may be gated off to you later on in the game. 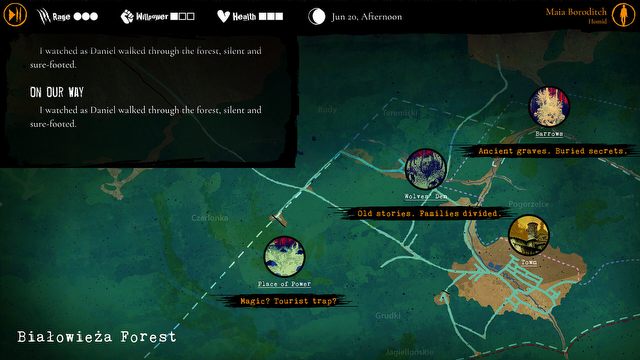 There's also Personality to keep track of, which is split into five different, quite inventive classes: New Moon, Crescent Moon, Half Moon, Gibbous Moon, and Full Moon. These end up determining your character's nature and alter the way you can approach decisions and situations. You’ll have to refer to your nature several times over to make sure you fully understand what your version of Maia is and how she’ll respond to things.

It can, of course, be frustrating to have to play through Werewolf: The Apocalypse – Heart of the Forest when you're faced with managing stats as well as having to mind the written story and decisions. But at the same time, this keeps you from simply skimming through the story and making random decisions just to progress. When you finally reach a resolution, it feels all the more satisfying.

Everything in Werewolf: The Apocalypse – Heart of the Forest works together to craft a wholly unique story. While it's mostly an engaging and exciting narrative that'll have you flipping through screens as quickly as you can read them, there are a couple of shortcomings. 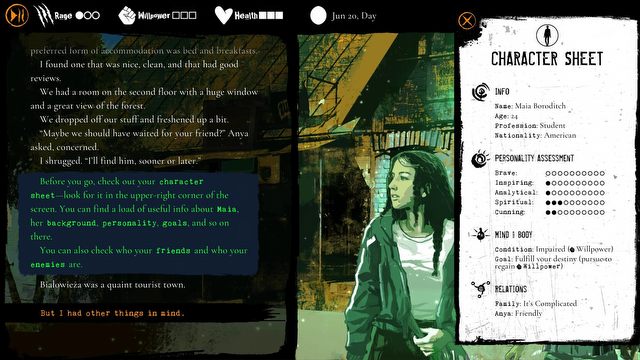 Unfortunately, the game does not include voiceovers, so you'll be left giving characters voices if you want to "hear" them in your head. Luckily, the music is brooding and atmospheric, and it's able to create a foreboding nature to the game that visual novels are often missing.

The game can also get a little overwhelming sometimes if you're not comfortable with plenty of reading to get done in a game. This might end up frustrating some players. For anyone who's been interacting with Japanese dating sims or visual novels for some time, however, this will undoubtedly be up their alley, a thrilling adventure in all likelihood.

A beast of a visual novel

Werewolf: The Apocalypse – Heart of the Forest is an excellent, dark, and horrific visual novel that deserves your time and attention. It offers immense payback for those willing to invest both, and it’s a title that anyone can dive into and get plenty of joy out of. If you’re tired of the seemingly endless parade of shooters and want to spend some time in a different genre, you can’t go wrong with this gem.

According to our users, Werewolf: The Apocalypse - Heart of the Forest for PC was a disappointment - the expectations before the release were higher than the current average user score.