I admit that the announcement of Port Royale 4 was the cause of great excitement for me. I really hankered for a pirate-maritime game, especially since this theme is usually neglected in games, and the last Port Royale came out eight years ago! But if anyone thinks eight years was enough for Gaming Minds to learn from all the mistakes they made and mend them... well, I'm afraid it wasn't. This game certainly gets more things right compared to the previous entry in the series, but it's still below good. The biggest downside of the predecessor – which, at the time, couldn't actually be called ugly – was not only the monotony, but also the ill-designed mechanics, whose faults wouldn't become clear until a few hours spent in the game. It's quite the same in this part – the problems only become conspicuous with time.

When the rum hits you... 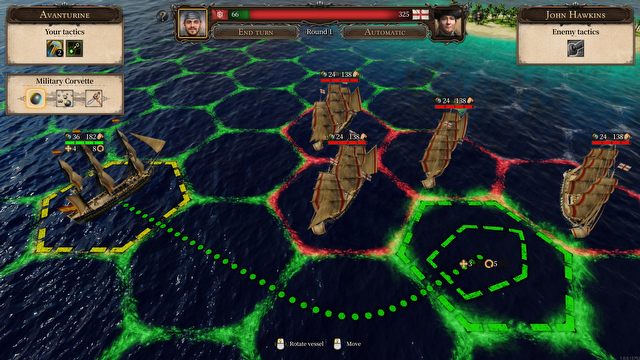 Before the battle, you get a detailed analysis of the player's chances – math is ruthless...

Port Royale 4 is again developed by Gaming Minds. This fact occasioned some rather worrisome feelings, since it's the same studio that developed the underwhelming part three. Gamedev is, of course, a tricky business, providing ample opportunities for such mishaps, but the news that the team was reinforced by people from Ascaron Software, the devs of the first two entries in the series, warranted some hopes. Unfortunately, the creators have only done half their homework – the fourth part of the series still can't really be called solid, since it rehearses many mistakes of the last installment, and adds a few of its own. 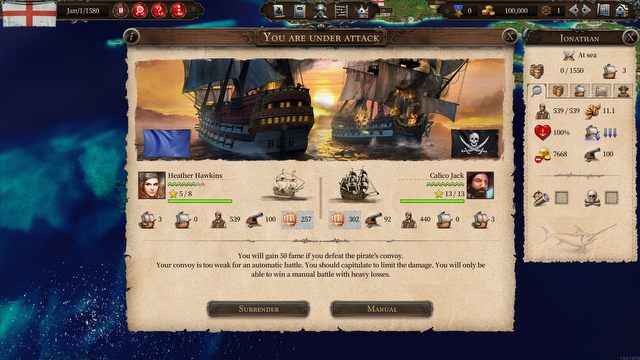 Checkers are more dynamic than this!

The beginning of the adventure with Port Royale 4, however, isn't indicative of the impeding disappointment. First impressions are pretty good: we have the great intro that's a pirate take on the intro to the cult Lord of War, as well as a set of comprehensive tutorials that yield some special rewards (such as unlocking the Queen Annie ship available later in the game). Such way of encouraging players to spend well over an hour learning the basics of the game is certainly laudable. Once you start playing, though, it seems the game throws you on the deep end: the lessons from the tutorial seem out-of-context when compared to actual gameplay. And so we have to spend the first hours of the game learning anyway, often by trial and error.

The foundation of the game is pretty simple. The player takes control of a particular city belonging to one of the economic powers of the era – Spain, England, France, or the Netherlands. At the beginning of the game, we also choose our avatar, flag, and career path (one of four) that influence gameplay-defining characteristics (e.g. Piratess will not be attacked by other pirates, but the cost of each building increases by 20%). Later, the ships available at the beginning of the game are used to transport basic raw materials from the native city to neighboring towns. ! While we can operate them manually at first (from selecting the destination, to loading and unloading goods in specific ports), over time, trade routes should not only be automated but also optimized – which is the first major problem of Port Royale 4. The AI of ships appears faulty – some of my ships simply wouldn't sell stuff automatically in their destination, generating huge losses. 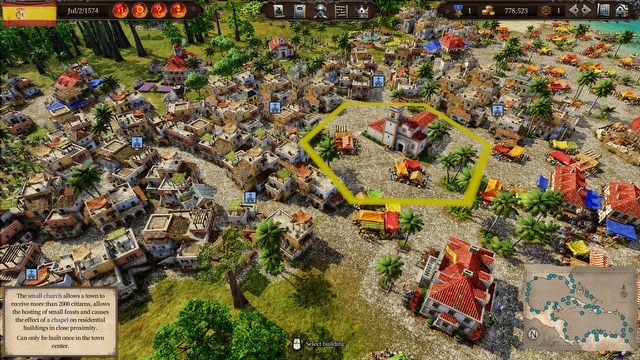 Each building has several visual variations of its own hex, so the cities in Port Royale 4 are really diverse!

This wouldn't be such a huge problem on two, three trade routes, but when it repeats on over a dozen of them (including those operating at near unprofitability – some towns need the given types of goods to thrive and expand, so the economy isn't the only factor). The game doesn't provide clear information about route profitability – the only way to tell is by looking at losses generated, and trying to rectify them asap. These messages can be found in a rather obscure player assistant window (the assistant gives us general messages regarding routes or towns having problems), and the adjacent stats tables. The fact that such crucial information isn't readily available, but rather comes as part of general feed near the minimap can be considered a design oversight. After all, finding games that solve the same issue with handy solutions isn't really hard (vide Crusader Kings or Mount & Blade). Switching between different windows is another impractical solution. Why? A great example is planning of trade routes – when setting out a transit network and defining export and import goods, we're constantly forced to close the route planning window and open the production table of each city to ensure there aren't thousands of units of raw material left behind. The problem here is that the markers indicating which goods are created in the city are useless if, for example, the given city doesn't produce wool, but has a great market for it, and has accumulated horrendous amounts of the material. So, the issue in terms of design is that two of the game's most important aspects: plotting routes and navigating tables, are very unintuitive and awkward to control. 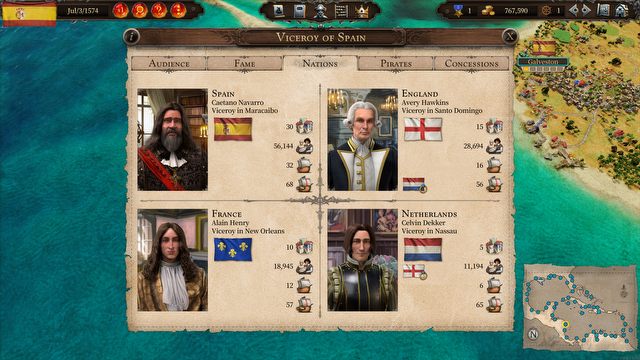 The most annoying bastards in the game – you have to do what they say if you don't want to hang.

The game can also be unfair. How? A simple example: After a few hours of the game, I thought I had mastered the trade routes, which brought huge profits – carrying out the campaign missions ordered by the viceroy in the meantime (otherwise you lose honor, leading to game over). I was doing well until one of the campaign quests completely revalued my profitability, causing nearly all of my routes to rapidly bring huge losses, forcing me to completely change my strategy. And so, I lost almost all of my cash (I also have to point to the fact that a game about pirates could use a slightly less generic currency than "cash"). This caused a frustrating situation, where I could buy resources in other cities, but only through automated trade routes, not manually (same as buying additional buildings in cities on credit). Does it make sense? The game doesn't end even if your a couple mil in arrears – in theory, it's still possible to get out of it, but it's neigh impossible in reality, so the only way is to save the game often.

But what about the game's upsides? 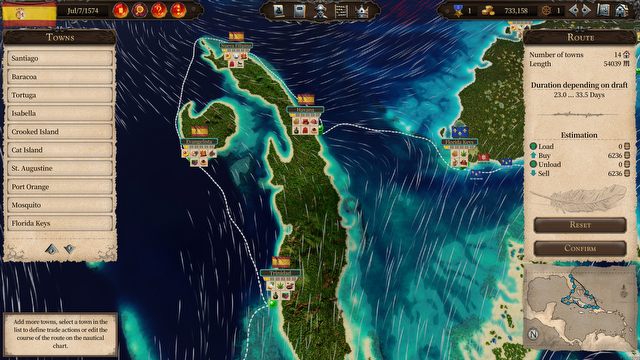 Plotting trade routes is an arduous process, but satisfactory – once it works...

For many, it will be the naval battles. They evolved from a chaotic system of real-time skirmishes to an elegant system of turn-based clashes on hexes. This certainly improves control and legibility, but negatively impacts the intensity we customarily associate with naval battles. So, it's fun, but it isn't really exciting. Probably the optimal way to experience the game is though the free mode – choosing any faction we wish, freely deciding on the native city (which isn't possible in the campaign). Here, too, we encounter quests – less invasive than those in the campaign, though. And so gameplay becomes much more accessible, although making sure the routes are profitable and efficient still requires much effort.

In terms of visuals, the game is doing really well – it seems a little blurry at first, but once you get used to it, it becomes quite easy on the eyes. The NPCs (viceroys and enemies) also look pretty good. Here, the infographics and tables that can be criticized for low functionality and clumsy navigation capabilities, have to be commanded for their visual design and aesthetics. And that's it...

Buy it if you're into the atmosphere 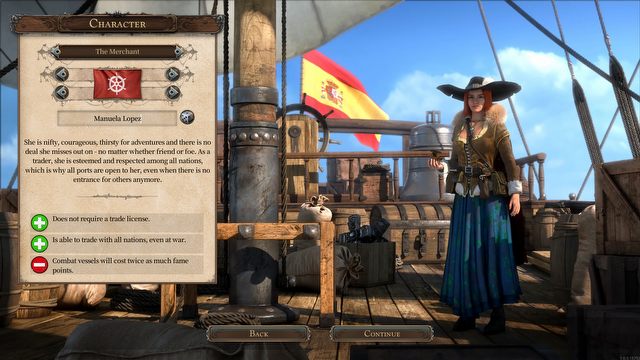 I had hopes regarding this game – not exorbitant, but also not minimal; I was hoping for a pleasant surprise, a game that's universally worth to recommend. But can Port Royale 4 be played without gnashing your teeth from irritation? In my opinion, hardly. Should Gaming Minds switch to gardening? Not really. It's far from disappointing, it's not nearly among the worst games this year. Some players, especially those keen on logistics, statistics, reading tables and tweaking sliders to maximize profit should have a good time here. But anyone else, the players more inclined to relaxing management or action, can't really find that here. I will certainly return to this game in a few months, because all of the blemishes and issues I highlighted above can be easily mended with patches. The potential is certainly there.

According to our users, Port Royale 4 for PC was a disappointment - the expectations before the release were higher than the current average user score.