Where the Heart Leads Game review

Where the Heart Leads is an extraordinary game despite being so ordinary. The word “mundane” comes to mind when trying to describe it, but that word simply relates to its setting, characters, and the regular choices you will have to make playing as the game’s protagonist, an average man named Whit who lives in the fictional North Western town of Carthage. This normalcy is actually what makes the game so relatable and so powerful at the same time.

A game of choice 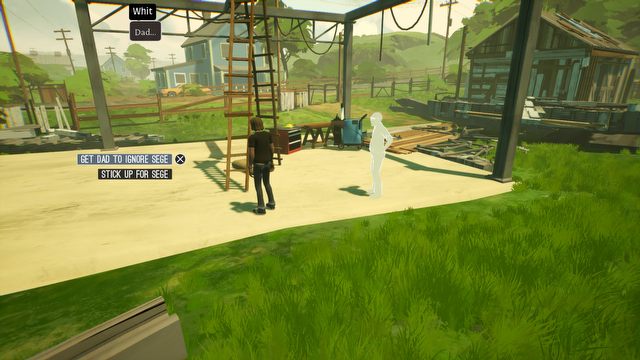 The game begins on the night when a giant sinkhole appears in front of Whit’s farm and the family dog gets trapped below the surface. Whit and his family devise a plan using a pulley and a bathtub to lower him to where the dog is, but things don’t go as planned and he plunges deep into the hole. What happens next is essentially an ephemeral experience that lets Whit retrace his life and all the people he met, choices he made, and lessons he learned.

Throughout these memories, you learn about Whit’s background such as his family, his neighbors, and his next-door crush who eventually becomes his wife. Each memory during the specific part of Whit’s life takes place in a different setting such as his family’s farm and the town he and his wife move to. You essentially grow up with Whit as you see him go from a unsuspecting teenager to an old man with a family and great-grandkids. 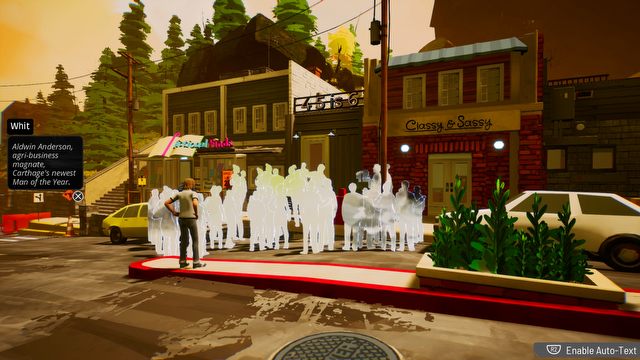 You can’t alter growing up, but how his life develops is ultimately up to you in the choices you make along the way. For instance, deciding to tell your parents how you spent your day when you’re a teenager or choosing to take your kids to the toy store or the lake as an adult are simple choices. These slightly affect the flow of the game and introduce different conversations. The more pressing choices, however, can affect the entire outcome of that specific chapter and even future ones. 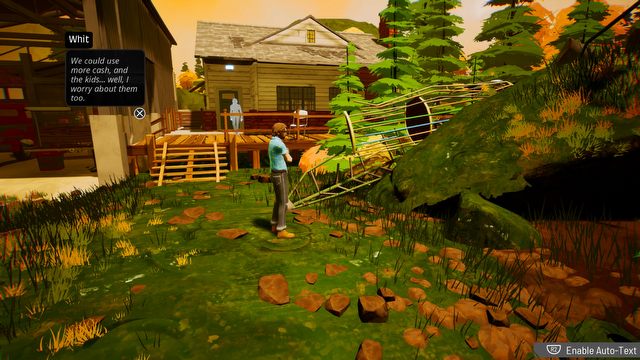 These are what ultimately let you shape the game to your version of Whit’s life. Choices like choosing to have your brother’s back time and time again after your father disapproves of his lackadaisical lifestyle will let you form a strong bond with him as you grow old. Later on in your life, you will also need to make one choice that will affect the entire trajectory of your middle-aged life and your career.

What’s great about these moments is that you won’t know how much they will affect your outcome until you see it play out. There are no wrong or right choices here as each one essentially gives you different results, and you won’t know what could have been unless you play it over again and choose differently. If only life were like that, huh?

What’s more, some of your choices will also influence the look of your environment. Whit and his brother are artists by trade so there will be times you will take on projects, constructing large sculptures around town or decorating certain areas the way you see fit. These choices have consequences too, of course, but they also provide a visual representation of your decision and let you make an impression on the world around you. 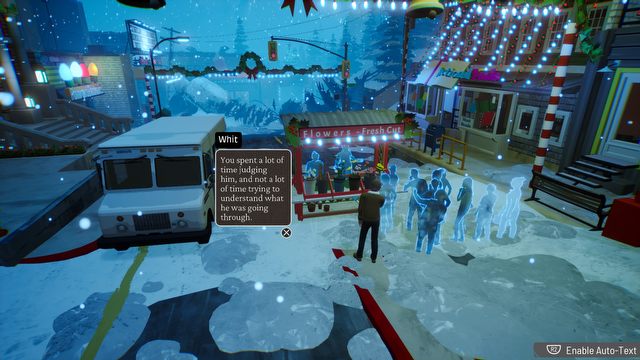 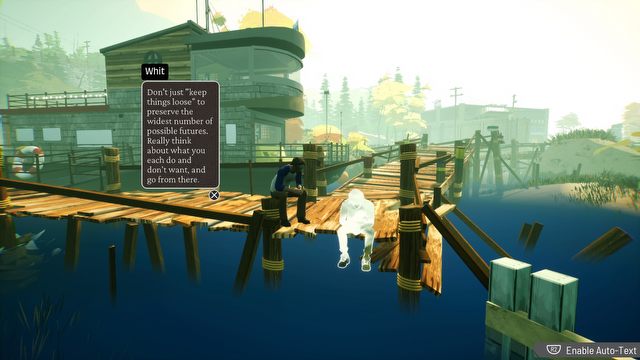 The game is set in realistic locations, but visually it feels like you are living in a surreal world. Whit is the only character to be fully modeled and represented while everyone else simply looks like a silhouette giving you this feeling like they’re not really there. The environments are also cast in a glowing bloom that give your interactions this soft dream-like sensation. Also, whenever Whit builds something, you do it instantly by holding a button for a few seconds, and then bam – instant tree house! This, plus its interesting design choices bathe the game in magic-realism that continues to make you wonder what exactly is playing out before your eyes. Are these memories, thoughts, or something more?

You will have lots of questions like this as you play, but luckily the game has tons of information for you to read through going more in depth about certain memories and even recapping the outcomes of a character’s life you influenced. Because there is no voice acting and you will be mainly be talking to various people all the time, you will oftentimes feel like you are reading a novel. It does start off slow at first and does feature a handful of typos, but its evolving story and rich character development outweigh these flaws and make you fully invested in its cast making you wonder how their lives will play out.

A game of life 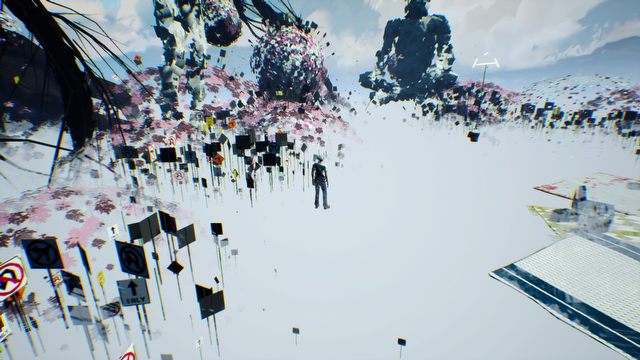 Ultimately, Where the Heart Leads stays with you well after the credits roll – it’s that captivating. You wouldn’t think at first you could get so attached to these characters, either, but you do making it so much harder to say goodbye. What happens is that you leave feeling grateful for the chance to play a game that acts as a sort of adult simulator letting you grow old, become a parent, and cope with the realities of the world around you.

It teaches us that just because we aren’t saving the world from invasion or conquering some magical kingdom, our choices, no matter how trivial or mundane we think they may be in the moment, are actually quite powerful as they can truly shape the life we are given.