The world of big corporations is a cruel and ruthless place  a place where sentimental, or rash moves are unacceptable, and strategy is planned not for days or months ahead, but for years. There's no doubt that Epic Games, currently valued at over $17 billion and owned in 40% by the Chinese gargantua, Tencent, joined this group of "soulless giants" and is pursuing its far-reaching plans. And gamers, as usual, are watching from the sidelines. Whats at stake? 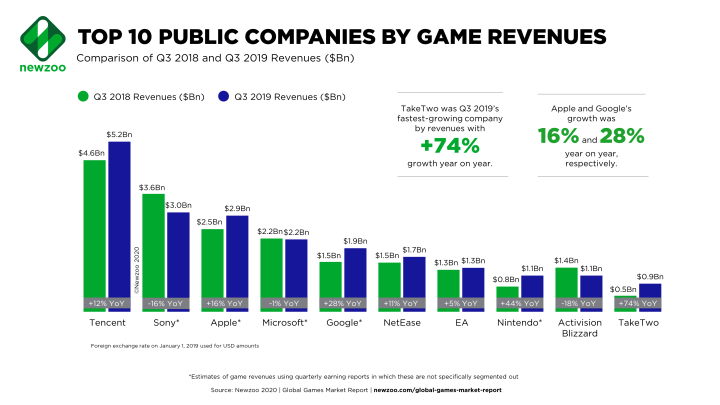 Tencent is the biggest of the big. Source: newzoo.com

One engine to rule them all

Some condemn the company's actions, accusing it of monopolistic practices (such as exclusivity of games on a single platform), and others literally adore it for giving away free games, supporting developers, and fighting tycoons like Valve and Apple, whose appetite for a piece of pie always seems to grow. The problem is, in my opinion, that this is all a big hoodwink meant to distract us from Epic's long-term plans. Plans where we, the players, are just extras; passive observers, whose support is bought with free games. The stake of the battle? Not so much the digital distribution platform, but the future of Unreal Engine and the total domination of the market by Tim Sweeney and his company's tech solutions.

Is there really that much to fight for?

For many years, Unity dominated the engine sector, especially among new, independent developers. According to a survey by MarketWatch, in 2017, Unity powered 48% of projects, while UE only 13%. Thedata from 2019 indicates more than 50% games on all platforms (PC/consoles/mobile) used Unity. What's more, this segment of the industry is estimated to be grow to more than $3 billion in 2024, and more than $4 billion in 2026. In other words, theres quite a pie to win, and Epic doesnt have the knife of the right size for now to get the cut it wants. When we browse the relevant forums and groups, we realize that the engine to-go for aspiring developers continues to be Unity, especially in the rapidly growing mobile segment.

Let's take a look at the biggest decisions Epic Games has made over the past year. First, they launched an entire campaign, initially against Valve, related to the 30% fee it charges on games sold through Steam. Not long after, that offensive extended to the other colossi of the mobile world: Apple and Google, charging identical fees. According to Sweeney, 30% is way too much, and it smothers smaller studios. And so, he offered an alternative (for now, only applicable to PC games): his store charges only 12%. On top of that, he's willing to forego the 5% license fee if the devs use the Unreal Engine. The veritable Robin Hood of the gamedev. 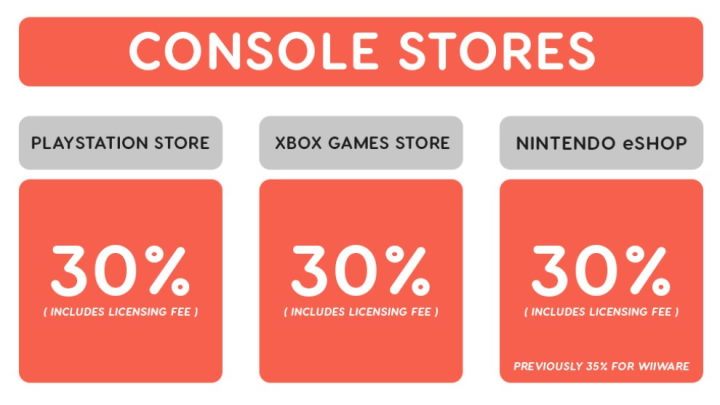 Everyone charges 30%, but let's only target some of them. Source: ign.com

The Problem is that 30% is some arbitrary invention of a single company, but rather an industry standard. As nicely summarized and reviewed by IGN, 30% is what all global retail giants such as Amazon, Best Buy and GameStop, as well as GOG, Microsoft and Sony charge. Why then the head of Epic Games never targeted these companies? Indeed, why have they done quite the opposite? Recently, Epic launched an vigorous campaign promoting the PS5. Remember slogans like "PS5 is a masterpiece of systems design"? So, whats it all about?

Well, I think it's all about the Unreal Engine. On consoles, the engine is supposed to technologically outshine the competition and convince the big studios its the best thing, so messing with Sony and Microsoft makes no sense. On the other hand, in the context of Steam, the App Store and Google Play, the battle is fought over small, independent developers, as these platforms have long been their domain. This is where games created by micro dev teams, sometimes by a single person, have flourished and won the hearts of millions of players. It is these small studios whom Epic Games wants to become BFF with, Unreal Engine leading them to a brighter future full of dollar bills and all.

Will it work? Will Epic Games convince developers with all its efforts, allowing itself to largely monopolize gamedev with their engine? I hope not, although this is a fairly plausible scenario; after all, we've long become accustomed to the only right operating system, the only right internet search engine, the only right office suite, the only right social platform. In a way, it's comforting that a regular player is unlikely to have any impact here, and that it will all play out on corporate meetings. They typically threaten each first, showing teeth, only to go to court and sign an agreement behind closed doors, cutting the cake according to their own ideas. And us? Well, we can't blow it, so we won't regret anything. We can simply enjoy Tim's free gifts while watching what future brings.