No Mans Sky was released on 9 August 2016 among an atmosphere of enormous expectations. A small team of passionate enthusiasts was supposed to achieve the impossible  deliver a game to end all games, overshadow everything else the industry had by offering an enormous universe brimming with procedurally generated content, sufficient for hundreds of hours.

The reality, as it does, took a different turn. The game did offer a gargantuan world, but it revealed everything it had after a few hours, like a bad date  the world was depressingly unsubstantial, monotonous, mostly ugly and riddled with glitches at that. Instead of lush and beautiful worlds from the trailers, we would discover  time after time  boring, brownish planets that had nothing interesting to offer. Instead of great, space battles and an unforgettable adventure, we got mundane resource collection void of any significant purpose.

This alone was reason enough to seriously aggravate the players, but the fit really hit the shan when people started analyzing and comparing the trailers, previews and pre-game interviews with Sean Murray, with the final outcome. After the release, people recalled all the elements that had been promised, but couldnt be found in the game. The most notorious was the ability to meet other players in the gameworld  utterly impossible in actuality. Virtually all aspects of the game were decimated  the planets ecosystems were supposed to be richer and more diverse, the combat more complex, the relations with sentient races more impactful. 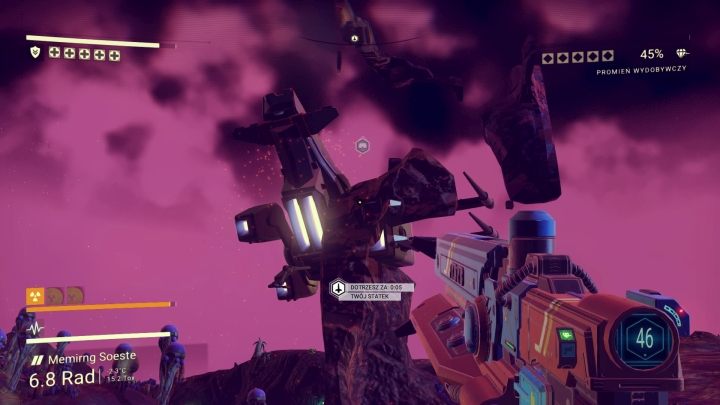 In technical terms, the released build was terrifyingly bad. Pictured above is my spaceship entangled in a solid rock and preventing me from departing from the planet.

Before the release, Sean Murray was very much present in the media, eagerly giving interviews, in which he was teeming with positive energy when talking about No Mans Sky. The developer wasnt as much giving false information about the contents of the game, as he was just casually mentioning different functionalities during his presentations about other stuff. He didnt openly deny the existence of certain elements when asked about them, nor did he care to curb the hype and legends that slowly started creeping up around the game, allowing the players expectations to reach exorbitant levels  all the while knowing that the game will not deliver any of that.

So, when the bubble finally burst, it was Sean Murray, who found himself in the middle of the carpet bombing of criticism that rained on Hello Games. As we all well know, and quite unfortunately, hate is as popular as cat memes on the Internet, and Murray was the perfect target. The group of players, who were genuinely concerned about the state of the game, was promptly infiltrated by a crowd of people, who were just looking for a good opportunity to spit vomit. As its often the case, the misconduct of one person occasioned a storm of aggressive reacts of anonymous haters, who  in their self-righteous indignation  have more than once went too far with their retaliation, hence rendering the release of a half-baked game a trifle in comparison. These are the times.

The most remarkable thing, though, happened after NMS became One Mans Lie. Thus far very much active on Twitter and other social media outlets, Murray has literally disappeared from the ether. Hello Games severed all communications with the outside world, only publishing info regarding the subsequent patches that mended the games most flagrant issues. 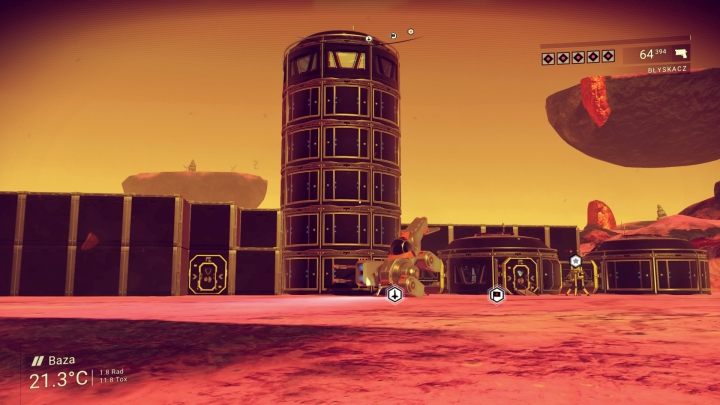 Building bases wasnt even officially planned before the release, but this addition significantly improved the whole experience.

Initially, the silence was fueling the anger of the Internets loudmouths, to whom it seemed a result of Hello Games remorse, which apparently served as another excuse for casting more aspersions. Eventually, though, everyone got tired of beating the obviously dead horse, the outcry slowly faded out, and the team finally had some time to catch their breath. As it turned out, they didnt let the opportunity slip.

At launch, the number one post on Steam was a petition for us to add multiplayer. There was a whole bunch of people that knew it was never a big part of the game. It was a lone experience.

In December 2016, half a year after the release, No Mans Sky, quite unexpectedly, received the 1.1 Foundation Update, bringing tons of new content  including the ability to build bases, and introducing minor quests. The game was still pretty far from what Sean Murray had been promising, but the first big step towards changing that was finally taken. And then came the next  the 1.2 Path Finder update added vehicles, and the 1.3 patch, Atlas Rises, furnished a storyline. Now, concurrently with the game releasing for Xbox One, No Mans Sky got the NEXT update, which introduced the long-awaited multiplayer. It admittedly did take a while, but we are able to meet other astronauts like us in the game. 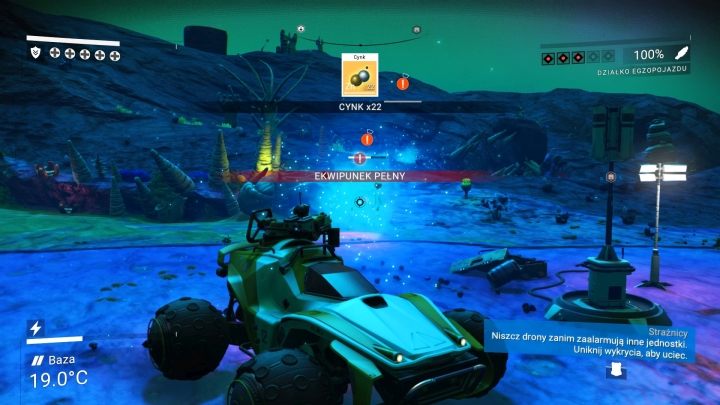 The vehicles were another interesting addition diversifying the game.

In the meantime, Sean Murray was quiet as a church mouse, only breaking the silence to approve some of the initiatives organized by the community or announce a new update. Although initially, many players found the breaking of communications pretty annoying, today, we can say that it was probably the perfect solution. The rather talkative developer changed the strategy and allowed actions to speak for him. And they did, slowly changing peoples opinions regarding No Mans Sky. And while its still not very hard to find people disgusted at what Hello Games have done, the number of players who have forgiven them and are now simply enjoying a decent game is continuously rising. 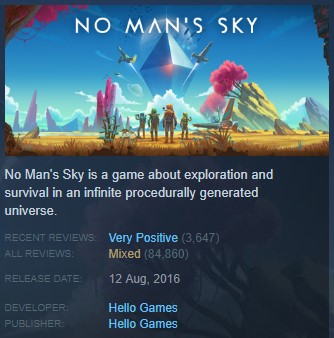 While in general, the Steam reviews are mixed, with only 41% of players recommending the game, the recent reviews are a different story: 83% of the buyers recommended the game during the last 30 days, and the figure is likely to go up.

The story could easily end here  an interesting anecdote about a lesson of humility for a creator of games, who understood that actions speak louder than even the most beautiful words. Could  if Sean Murray was consequent in his silence. However, apparently encouraged by the thaw in the relations with players, Murray started giving interviews again, and I cant help but feel that hes falling into the vortex again.

We decided instead to Focus on development rather than words. His tweet from July 17 seems worryingly inconsistent with the reality.

In the interviews given to The Guardian and Eurogamer, the founder of Hello Games repeats it like a mantra that he was given a lesson and will never ever promise things about the implementation of which hes not 100% sure. At the same time, Sean seems the type of guy, who easily gets carried away. In the two interviews, he goes about saying how cool it would be if they introduced farms into the game, but immediately bites his tongue and emphasizes that its not an official announcement. Bad habits that led to all the problems two years ago have apparently not been entirely rooted out.

Theres not much humility in the interviews, too. Even though Murray admits the mistakes he made as far as communication is concerned (never openly admitting he was lying), I got the impression he was trying to shift the blame on the players, who were, in his mind, unable to fathom the games original concept.

No Mans Sky was what we wanted it to be when it launched.

He maintains, for example, that No Mans Sky really was the game it was supposed to be since day one  it just didnt meet the surreal expectations. According to him, such assessment is warranted by the opinions of a handful of people, who actually liked the game upon the release; cutting content away during production is normal, he adds. Unfortunately, I have been following the game since the very beginning and for me, saying that No Mans Sky was alright on the day of the release is just distasteful. After all, I had to pull the plug of my console from the power socket more than once, because the game would freeze so hard that even the reset button didnt respond. 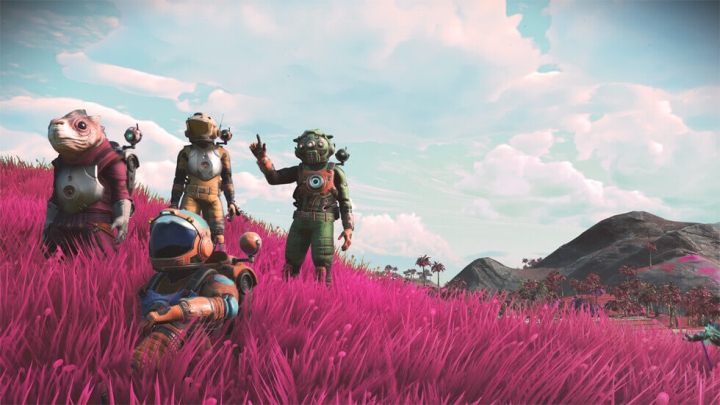 The multiplayer mode, promised from the very beginning, only made it into the game two years after the release.

The interviews with Sean Murray are sadly ruining the positive atmosphere that surrounds the game  the result of two years of hard work of Hello Games. He says he has learned the lesson, but for me, it feels like hes becoming arrogant again.

You guys were writing stories about there being massive refund rates, and that's not true  our numbers were slightly above average on PC, but that's par for the course when you have a game that sells a lot of copies and people play it on min spec machines, below min spec machines. They were way under the average on PS4, say  but we had no credibility to come out at the time and say these things.

We wont get fooled again, though, and thats the difference. The reaction of the Internet will be all the fiercer if any more empty promises will come from Hello Games. The only thing I felt after reading the interviews, full of appraisals for the game and attempts to put the blame on a misunderstanding of the original vision, was a bad taste in my mouth. It would be terrible if the reputation of the studio, reclaiming which was so painstaking, would again be spoiled by one man. Actions, not words, Mr. Murray. Actions, not words.