According to Wikipedia and Encyclopedia of Comic Books and Graphic Novels, a superhero is:

A superhero or superheroine is a stock character that possesses superpowers, abilities beyond those of ordinary people, and fits the role of the hero, typically using his or her powers to help the world become a better place, or dedicating themselves to protecting the public and fighting crime.

The first superhero in pop culture history was Superman – a non-Earth-born alien who was able to save the world with the help of near-divine abilities. However, it is not only characters such as Hugo Danner (the main character of the early 20th century novel Gladiator by Philip Wylie, who possessed superhuman abilities created through prenatal chemical experiments), but also Tarzan or Zorro who are considered the forerunners of modern heroes. Neither of the last two mentioned possessed powers that mortals could not attain. And they are – despite everything – more popular than the aforementioned Danner.

Superheroism (and the recognition that goes with it) is thus not intrinsically linked to an individual's abilities that go beyond nature, but to his or her willingness to sacrifice themselves in the name of a higher good or willingness to fight evil. Following this line of thought, we can say that, in some way, any one of us can become a superhero.

We decided to gather some of the most famous and interesting characters from film adaptations of comic books, who fought villains with the help of intellect, cunning, or great physical strength. You most likely won't become Iron Man or Batman, nor do we approve of acting in the real world like the Punisher, but Barbara Gordon, about whom you'll read further down this list, can be an inspiration to any of us. Let us know in the comments which one of the listed characters is your favorite. Or is there someone we missed? Check it out! 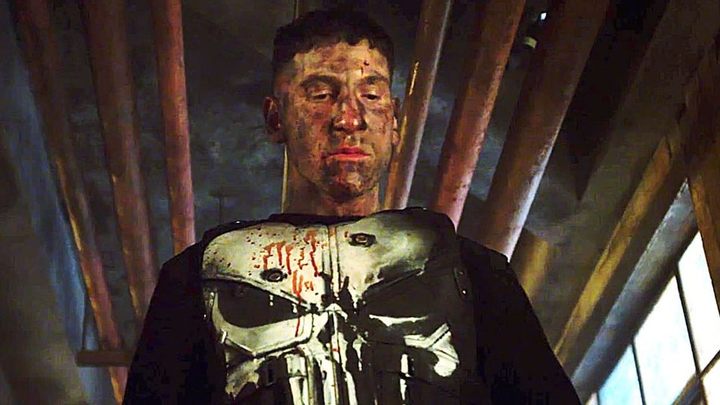 The first comic book I received as a gift was about... Spawn. But the very next one I bought on my own (with a little help from a friendly adult) was about the Punisher's vendetta. This was Mandragora's first series of books featuring Frank Castle. I still remember the thrill of delving into both of the aforementioned releases, but it was The Punisher that always drew me in more. Because of its maturity and brutality, the story was not meant for the eyes of such a young reader as I was at the time, but I followed the fate of the Marvel anti-hero with utmost excitement. The Punisher's story, I thought at the time, could have happened to any of us, because other than Frank being a former Marine and Vietnam War veteran, he's just a normal, fairly casual, inconspicuous guy.

Deciding unequivocally whether the Punisher is a superhero is difficult and depends on the personal views of the reader or viewer. Castle decides to take matters into his own hands after his entire family is murdered by members of the New York mob simply for being in the wrong place at the wrong time. He becomes a ruthless avenger who is the prosecutor, judge and executioner in his personal and violent court of justice. Speaking of justice, he becomes a murderer himself. Francis Castle, then, is a Bruce Wayne – not afraid to get his hands dirty. In fact, he wants to do so.

Also, a few screen adaptations of The Punisher are worth mentioning here. None of the Castle films have captivated either comic book fans or action movie lovers. There's not much to say: it's bad. It would be possible to squeeze much more out of such a fleshed-out source material than the 2004 and 2008 movies managed. The best Punisher feature remains the 1989 film starring Dolph Lundgren – a film that critics and audiences alike have gone a thousand times over. The Netflix series fared much better, though. 2017's The Punisher may not have become a hit on the scale of Daredevil (where Jon Bernthal's Punisher debuted), but it did break the the bad spell associated with the Frank Castle character. It's a solid series that captures the spirit of the Punisher perfectly, faithfully representing the complexity of this character known from the comic books. If you're looking for good Punishers, start in 1989 and finish on Netflix.