The film Diune has finally arrived in cinemas. The picture is the latest film adaptation of the classic science-fiction novel by Frank Herbert. This is a great opportunity to remember the best PC games about the desert planet.

In order to do this, we must go way back into the past. That's because this year will mark the 20th anniversary of the release of the last official game based on this license. Once upon a time, a studio called Cryo was working on a strategic MMO titled Dune Generations, but the project was abandoned in 2002. Two years ago, the FunCom team announced they have plans for productions set in the universe, but no specifics have so far been revealed. In celebration of the film's release, only a tiny event in Fortnite was held.

Fortunately, fans of the franchise are not limited to new games. Older games based onDune are plenty, and with mods, most of them can be played comfortably even today. There have also been a number of notable, fan-made, free productions.

Currently, you can no longer buy any of these games digitally. This is because all publishers owned temporary licenses and couldn't sell their games once they expired. However, with a little effort, you can buy second-hand copies of these.

The first adaptation of the universe was released in 1992 and developed by French studio Cryo. The game combines elements of strategy and adventure, creating an unusual mix that still provides a unique experience today. The production has also aged very well in terms of visuals  it offers a lovely graphic style, partly inspired by David Lynch's movie, and partly an original creation of the developers.

Dune is designed for DOS and today it's best to run it with DOSBox. Unfortunately, we didn't get a good, working, open-source reinterpretation of the game engine, so we can't play an upgraded version. A decade ago, a project of this type called Dune Revival was in development, but it stopped at pre-alpha stage, far from comfortable gameplay. This year, someone made another attempt in the form of OpenRakis, but for now, only a save games editor called DuneEdit has been released. 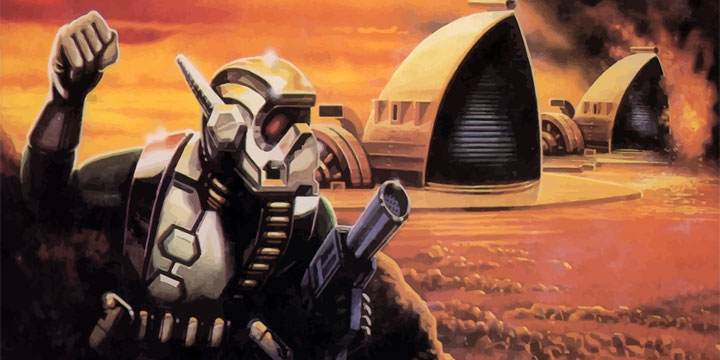 In 1992, Dune II was released. Contrary to the name, it was not a follow-up to the production by Cryo studio. Instead, we got a real-time strategy that practically defined the entire RTS genre.

The production has a cult status and remains very popular, so in this case, we have many projects to choose from to make the game more enjoyable on modern PCs. Of these, two are particularly recommended.

Dune Legacy  a classic game with a facelift 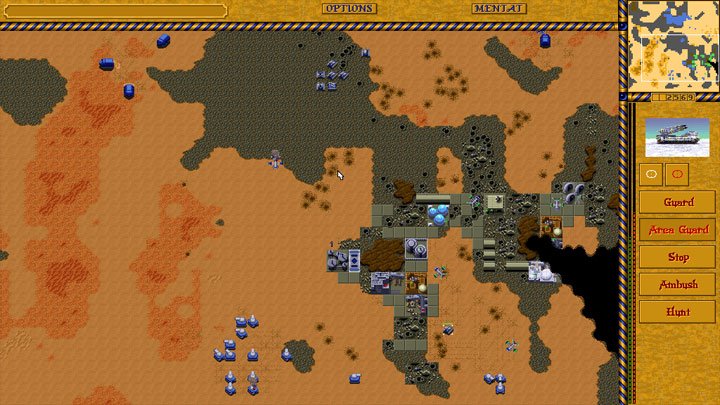 For most gamers, the best choice will be Dune Legacy. It's an open-source reimplementation of the game, which in practice means that it was ported to a new engine, using the files of the original, so it's not a standalone production.

The project ensures full compatibility with modern PCs and operating systems. It also brings a ton of improvements. We can play in high resolutions (including widescreen) and use a new control system, typical of modern RTSs, offering, among other things, selecting multiple units and issuing movement commands with right mouse button.

Dune Legacy allows you to play all the story campaigns, both those from Dune II and the classic Super Dune II mod, which offered three additional ones. A multiplayer mode is also available.

Open Dune  something for traditionalists

For purists, on the other hand, OpenDUNE is the best choice. This is also an open-source reimplementation of the game, so it provides full compatibility with modern PCs and fixes technical bugs. It introduces no other improvements, though, such as graphics and interface. The whole project is designed to allow you to comfortably run a production version as close as possible to the 1992 original. 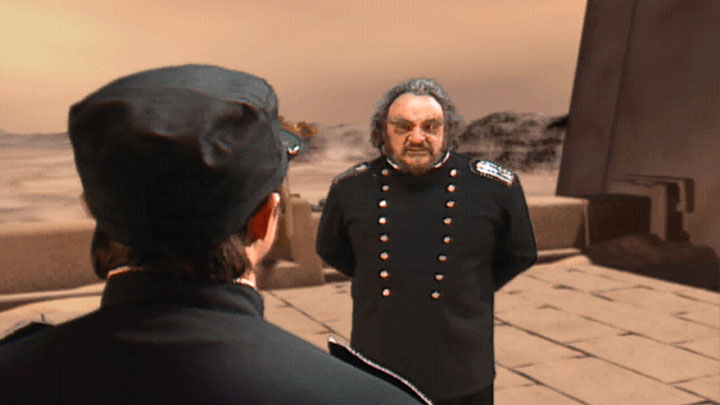 In 1998, the game Dune 2000 was released. The project began life as a remake of Dune II, but so many gameplay and story elements were heavily altered during production that players eventually got something new. On the day of its release, it was received rather coolly, as it was considered too similar to other RTSs from the Westwood studio. As time went on, however, the reception improved greatly, which best shows how well it was supported by the modding community.

If you want to play Dune 2000 today, you should take interest in two projects: 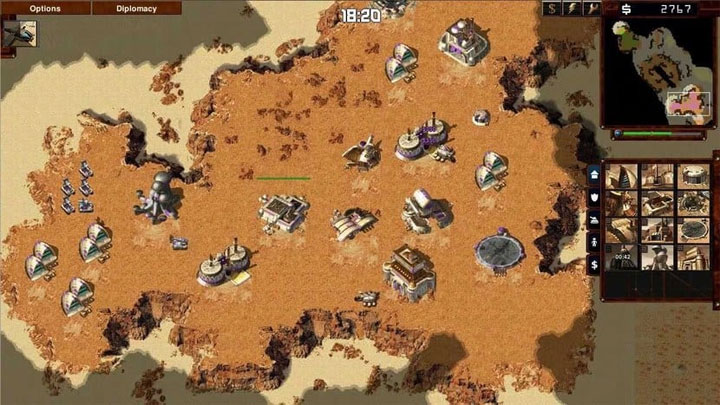 Currently, by far the best option for playing this title is the OpenRA project. It's effectively a new engine, allowing you to play enhanced versions of the Westwood studio's classic RTSs. Importantly, you don't need to own Dune 2000. All you need to do is to download this project and then run the included file "Dune2000.exe." The program will download the necessary data itself. This will give you access to all campaigns and the mulitplayer. The only thing you will be missing are the cut-scenes and some of the music. These you can add by letting OpenRA rip them from the original disc with Dune 2000.

Returning to the planet Diune with the new engine is a lot of fun. We get improved graphics and interface, bug fixes and functional multiplayer. This is the easiest and most convenient option to revisit Dune 2000.

An alternative is CnCNet. It offers numerous improvements and brings back the multiplayer, but does not include the campaign and requires the full version of the game. The latter, however, can be bypassed. All you need to do is copy CnCNet.exe file to OpenRA folder (which you used to rip files from Dune 2000), and then install patch 1.06 there.

You may be wondering why bother with CnCNet at all. The reason is that Dune 2000 has a fairly small, but active online community. Therefore, to increase your chances of finding humans to play with, it's best to have both OpenRA and CnCNet installed, as both projects use different servers. 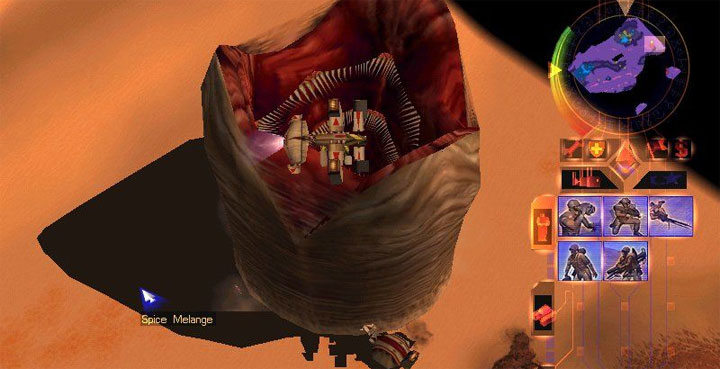 The year 2001 brought us a rehearsal of 1992  with two games based on the Dune license released again. First to market was the strategy Emperor: Battle for Dune. It was Westwood's first, fully 3-D RTS, and it blazed a trail that Command & Conquer series would later take.

In terms of gameplay and graphics, the game has aged brilliantly. What makes it a bit worse is that to enjoy it, you have to struggle a bit. The first problem is that it uses the SafeDisc anti-piracy software, which is no longer supported on modern versions of Windows. Fortunately, already on the day of release some configurations had problems with it, so Westwood studio itself released an official tool to bypass this DRM (Emperor Install Fix), which we can now use to install and run the game on any modern PC.

You may also experience severe stuttering in gameplay, especially on Windows 8, 10 and 11, making the game virtually unplayable. You can solve this problem by installing Framerate Fix 60 FPS.

On the other hand, there's no good way to force the game to run in widescreen mode. A long time ago, Westwood released a patch to allow this, but it was "half-assed" as kids say, as it simply cut off the top and bottom of the screen. Worse still (and perhaps needless to say) things were going on on the invisible parts of the screen. Therefore, there's no good way to avoid playing with 4:3 resolutions. 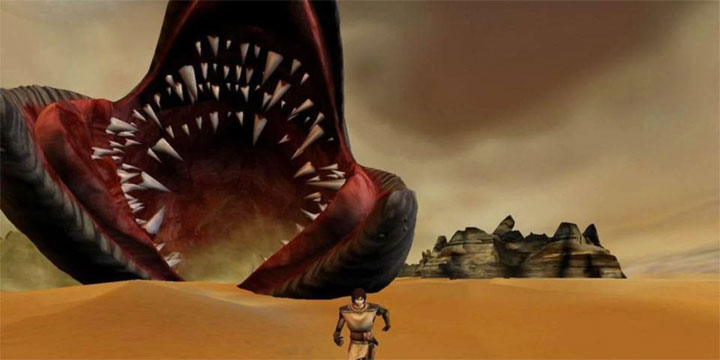 Frank Herbert's Dune is the latest official production licensed by the brand in question, and... by far the worst. All of the previous games have had strengths and weaknesses, but each is ultimately worthy of recommendation. Frank Herbert's Dune is a third-person action game that was already bad on the day of its release in 2001, and has additionally aged badly since then.

If you absolutely want to play it (and it's not out of the question, as it's the only non-strategic adaptation of Dune), the good news is that the production handles modern PCs quite well. There are some minor glitches, but they don't interfere with gameplay. The advantage is that there's no problem setting up wide-screen resolutions. If you're playing on Windows 10, it's only worth to use a modification that fixes the Vsync feature (which doesn't work on that system).

Fans of the franchise should also check out some unofficial propositions. The following are not the only fan projects created in the universe, but we have selected, in our opinion, the best ones.

Dune Wars: Revival is a modification to Sid Meier's Civilization IV: Beyond the Sword which moves the action of the game to the surface of a desert planet known from Frank Herber's books. The use of Civilization's mechanics makes the whole thing a much better representation of the events from the books than RTS games.

The authors changed practically everything. We get new maps, technologies, cultures and factions. The gameplay mechanics were also heavily modified to better reflect the specifics of this universe.

Dune in this mod is a mix of various games, movies and comics based on the license. Recently, however, one of the authors released an add-on called the Villeneuve Inspired Patch, which reworks a ton of visuals and sound elements to resemble this year's film adaptation. 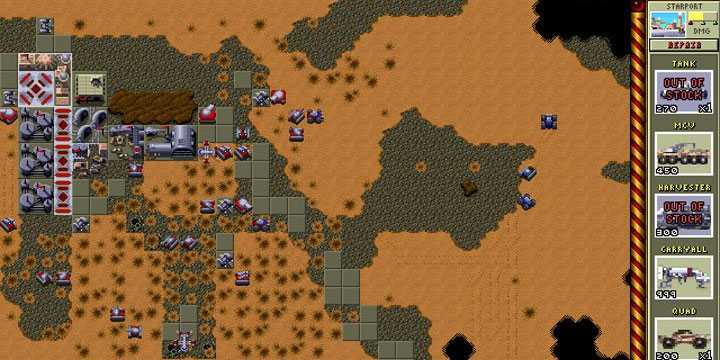 Dune Dynasty was designed as an unofficial sequel to Dune II. It offers additional missions and campaigns, as well as quite a few gameplay changes, including fog of war, better AI, skirmish mode, and many other new features.

Interestingly, the project runs on OpenDUNE, but unlike OpenDUNE, it offers gameplay improvements and high-resolution gameplay.

Dune 2: The Golden Path was conceived as a free remake of Dune II. The project offers only multiplayer (nowadays rather exclusively, if we find someone to play with) and PvE skirmishes.

The game is notable for introducing quite a few changes while retaining the atmosphere of the original. It also adds many new units, changes the destruction system and implements interesting mechanics allowing independent factions to ally with other sides, providing various bonuses. 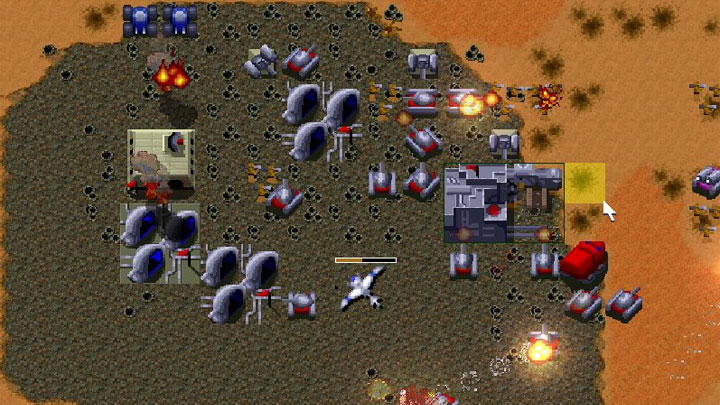 Dune II The Maker is another free remake of Dune 2 that also offers numerous gameplay, graphics and interface improvements.

Dune II The Maker and Dune 2: The Golden Path complement each other very well, because one offers a single-player campaign, and the other, online multiplayer.

Another notable fan game is Dune IV HD Edition. This project also recreates the mechanics of Dune II, upgrading them with contemporary elements. At the same time, however, the interface and many elements of the graphics have been thoroughly revamped.

The biggest attraction, however, is the five new story campaigns  in two, we direct the Atreides, and the others allow us to command the forces of the Ordos, Fremen and Harkonnen. There was also a multiplayer mode.