In Watch Dogs Legion, we receive a large fragment of a dystopian, cyberpunk version of London. Although we dont know the exact size of the map, we already know that it will span the area between the Wellington Arch, Isle of Dogs, Camden Market and Windrush Square, inhabited by eight, distinct communes. The virtual metropolis will of course come with all its famous landmarks  the Big Ben and the Tower Bridge included.

But unlike in the actual British capital today, the sky is full of drones and thousands of cameras which constantly monitor all the lovely people. Also, there are many futuristic vehicles on the streets, which can be used to move around the city, but we can also travel on foot, which may sound boring, if you dont know the game comes with Assassins-Creed-style parkour.

The driving force of the game are the main missions, accompanied by a variety of side quests and activities. In addition, combat is an important part of the game. You can chose between hand-to-hand and melee combat, or use a wide range of firearms, including futuristic gadgets (a smartphone used for hacking electronics, or scanning citizens and enemies, for example). The developers allow players to fight enemies in various ways  using firearms in open combat or stealthily eliminating them one by one. Itsworth noting that you can stun your opponents  the developers insist the game can be finished without a single kill. Its important to remember that when your life is in danger, you can simply give up. The character will then be thrown to jail; it temporarily excludes him or her from the game, but you can use another character to bust them out (for example by breaking into the jail and cleaning their record). 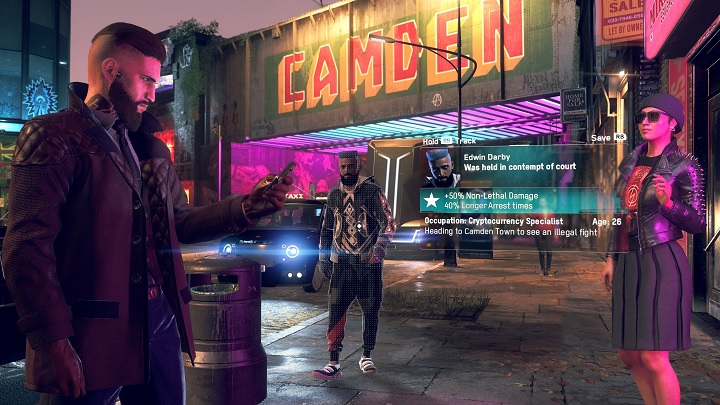 It seems similar, but a bit different - post-brexit London has become a cyberpunk dystopia.

In Watch Dogs Legion, you can play alone or with up to three players, with whom you explore London, as well as complete various missions, quests and side activities.