You're probably had enough of reading about the "phenomenal SSD drives featured in the new Xbox and PS5." On the one hand, it's understandable  it's actually a bit boring at this point. Especially since flash media has been a thing on PC for a very long time. But the thing is that the solutions introduced in the next generation of consoles will allow a few tricks that PC users may envy. We're mainly talking about the Quick Resume function.

Some Xbox Series X solutions will certainly be appreciated by PC gamers.

A simple example of how this works: one of the first titles we launched on Series X was Doom Eternal. We played for an hour, maybe two, and then turned to Dirt 5, the new Yakuza and Call of Duty: World War II. In the meantime, the console was disconnected from power several times, re-connected to various TVs, etc. When I booted Doom on the console menu on Monday, the gameplay began at exactly the same point as it ended it on Friday  after a few seconds. No entering the game's main menu, no loading, no selecting the last save. You just select your game and dive right into it. All within no more than 10 seconds.

If you regularly use a computer, you may remember how great a leap in user comfort was provided by the SSD. The impression in case of consoles is even greater. Launching the console via the gamepad and starting a race in Dirt 5 is a matter of a few seconds. If we get tired of crashing the Fiesta, we'll need literally a few seconds to switch to massacring demons in Doom. I don't know about you guys, but my PC can't do that.

The set of connectors on the back of the console looks rather modest  will you miss the HDMI input?

At first, I was admittedly quite skeptical about the Quick Resume feature. The question of how much users will actually use that capability during a single session on the console is debatable. Nevertheless simply being able to do that should be a welcome addition. But when it comes to resuming games straight from the point where we recently finished, with the main menu completely omitted, is something absolutely sensational. No need to play until the next checkpoint!

It is also worth mentioning, by the way, that Quick Resume, unlike game saves, does not sync between devices using the same Microsoft account. This isn't surprising, though . Quick Resume also does not work in multiplayer. 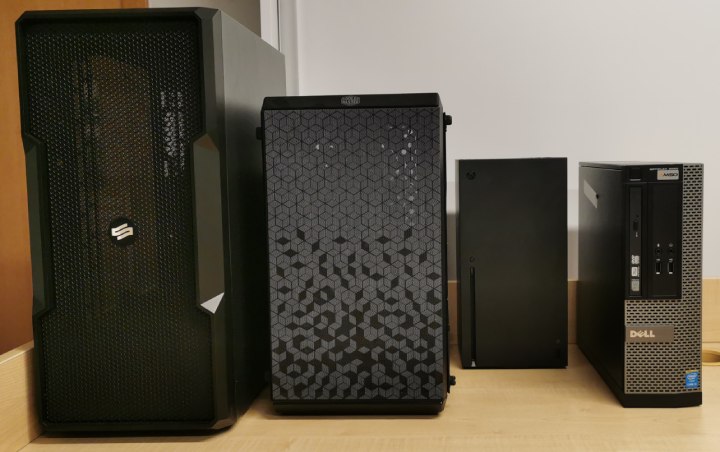 Consoles have never been this close to PCs.

Our tests have confirmed the reports of high working culture of the new Xbox. To say the equipment is quiet is a grave understatement. Series X is completely silent. There's no point even comparing it to PS4 Pro, which is jokingly referred to as "vacuum cleaner" or "jet plane" for a good reason.

There has been some concern about the high temperatures that would result from silent cooling. These were certainly premature. Our copy of the Series X, even after several hours of working and playing non-stop, was nowhere near overheating. This was confirmed by tests from other outlets, which made it clear that the new Xbox achieves lower operating temperatures than X One X, as well as PS4 Pro. The air stream coming out of the vent outlet is warm, but you won't fry eggs on it. Remember, however, that covering the vent outlet can negatively impact the performance, or even damage the console.

There's heat coming out of these holes, but there's practically no sound.
Previous
123
Next
Most Read Articles
Editors' Choice

The launch of the new Xbox is imminent, and the atmposhere's getting heated. What about current gen's greatest hits though? We spoke to Coalition about Gears Tactics, and the future of the series on next-gen Xbox.