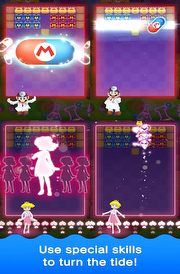 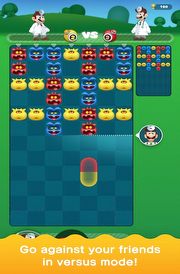 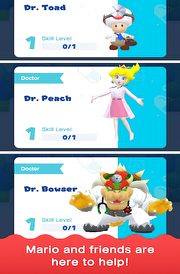 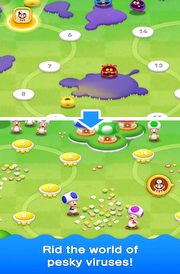 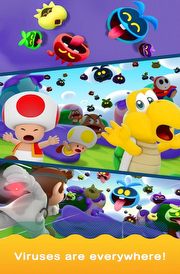 Dr. Mario World is a mobile game based on Dr. Mario, released by Nintendo in 1990. The gameplay revolves around getting rid of viruses by means of two-colour capsules. Unlike the original, the emphasis was placed more on the logical than the arcade element. Created and re-released by Nintendo, the new version was published on Android and iOS mobile devices in the free-to-play distribution model.

Players' goal is to clean the board from viruses in three different colors, using as little capsules as possible. After placing a two-colour capsule on the board it begins to move slowly upwards. Players can rotate it and move it sideways. Matching three fragments in the same colour, either vertically or horizontally, eliminates them. Players have a limited number of capsules per level, so they need to plan their actions carefully in order to solve the puzzle. On the board there are also various walls, bombs, and turtles destroying viruses in various ways or locks blocking access to certain elements.

Apart from Dr. Mario, there are also such characters as Dr. Peach and Dr. Bowser as well as assistants like Goomba, Koopa Troopa, and Buzzy Beetle. Players can freely select a doctor and an assistant to create a unique pair.

Multiplayer includes 1v1 duels with other players, as well as the ability to share hearts (endurance points) and results with friends.

The basic form of monetization are diamonds. They are used to buy more capsules (to complete the level without starting again), to restore hearts, or to buy items and new characters (doctors). There were 200 levels available to start with, and over time more were added.