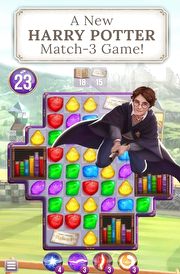 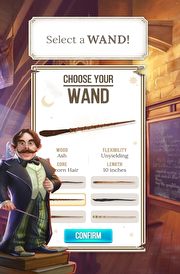 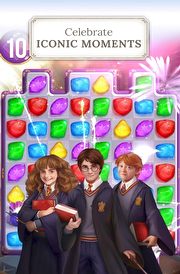 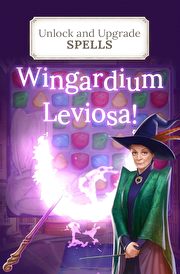 Harry Potter: Puzzles & Spells is a mobile puzzle game that takes place in a universe known from the books and films about the wizard Harry Potter - the player can see characters and scenes from cinema hits. The game draws inspiration from the Candy Crush Saga series. The game was developed by Zynga.

In Harry Potter: Puzzles & Spells the game starts with creating your own avatar. Then we start the right game - its general rules resemble what we know from the Candy Crush Saga series. The player must manipulate the blocks visible on the screen in such a way as to create sections composed of three elements. Then the squares disappear and the player receives a specific amount of points. The game is divided into stages - each of them ends after cleaning the screen from the blocks.

The developers have diversified the well-known formula by adding to it the possibility to use spells and potions that affect the course of the game. As we progress, our character learns more and more skills, so we have more and more opportunities during the game - but at the same time the difficulty level increases. Players can also form clubs (guild equivalents from other games).

In Harry Potter: Puzzles & Spells we can play both alone and with others. In addition to the single player mode, the game also offers an online cooperation mode.

Harry Potter: Puzzles & Spells has quite simple, two-dimensional graphics. The design mainly consists of an interface and illustrations that provide a background for the gameplay (and images of characters that occasionally appear on screen during the game). The gameplay is accompanied by spectacular lighting effects.

Harry Potter: Puzzles & Spells was released in a free-to-play model. In the game we also find optional microtransactions.