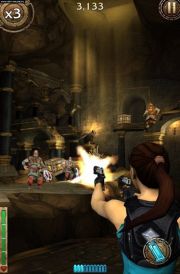 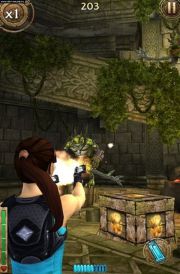 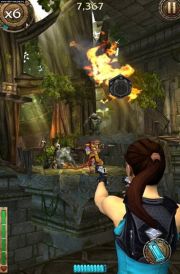 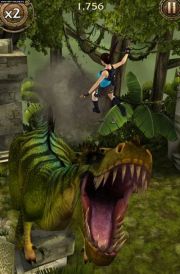 Lara Croft: Relic Run, released on AND, iOS and WP, is an endless runner. The game was developed by Simutronics studio and it is available in a free-to-play model with microtransactions.

Lara Croft: Relic Run is set in the same universe as the Tomb Raider series. As in most endless runners, we won't find an extensive story here. Instead, we simply get the opportunity to lead the title character during her numerous adventures in search of valuable artifacts.

Lara rushes forward automatically, and we use simple gestures to give her commands such as jump, slide or go down to another track. The authors wanted to recreate the franchise's atmosphere which is why we also have combat sections, both with ordinary opponents and with powerful bosses, including a Tyrannosaurus. In addition, from time to time, Lara is given the opportunity to drive motorcycles, run on the walls or perform crazy stunts in order to avoid a variety of threats.

As with all other endless runners, it is practically impossible to win. Sooner or later, we will make a mistake. The whole game is about reaching the highest possible score and attempting to beat our records and those achieved by the rest of the community, which can be viewed in the constantly updated online rankings.

The fun is enriched by a simple development system. During the run, Lara can collect valuable items and virtual currency - we can spend it on skills upgrades and new costumes.