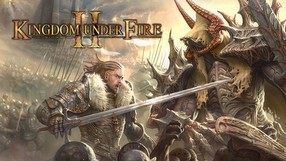 A fantasy real-time strategy with cRPG elements. Kingdom Under Fire II is set in a fantasy realm called Bersia, where three conflicted factions  Human Alliance (elves and humans), Dark Legion (orcs and ogres) and Encablossa (mutants and monsters)  wage a bloody war against one another. The player takes command of one of the conflicted sides and tries to turn the tide in their favor. While the Bluesides production lets you play solo in a story-driven campaign, the games main asset is its expansive, MMO-inspired multiplayer mode, including such elements as e.g. social features.

Kingdom Under Fire: Heroes is a hybrid of real-time strategy and arcade game, which takes place before the events taking place in KUF: The Crusaders. The game focuses on people who played a minor role in The Crusaders and they are the main characters in Heroes.

Kingdom Under Fire: The Crusaders

The second part of the real-time strategy with elements of cRPG, Kingdom Under Fire, from Korean company Phantagram Interactive. After 50 years of peace, another bloody conflict begins and the player has to take matters into his own hands.

Kingdom Under Fire is an interesting combination of typical RTS and cRPG games. The forces of good and evil meet again, it is up to you to decide which side you want to take. Each of the parties to the conflict received its own, long for 30 missions campaigns. There was also a multiplayer mode.