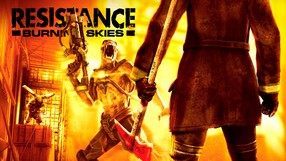 Resistance 2 is a continuation of the popular FPP shooting, which hit only on PS3. The first part was the starting title of this console and met with a warm reception. The combination of World War II climate and the invasion of the space race Chimer on Earth was liked by the players, which is why a sequel was created, offering a significant development of solutions known from its predecessor.

Resistance: Fall of Man is a FPS game created by Insomniac Games studio employees, known primarily for its series of platformers telling the story of Ratchet and Clank's fairy-tale adventures.