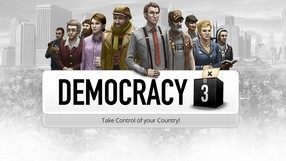 The third installment in the complex turn-based economical strategy game series developed since 2005 by Positech Games. Democracy 3 again puts you in the role of the leader of a fictional democratic country and tasks you with making a number of decisions that will let you satisfy the many conflicting expectations of the virtual society so that you can stay in power. The gameplay features a complex socio-economical simulation system, according to which every choice you make takes its toll on your country and its society. The mechanics of the game are similar to those known from the previous installments, while the changes introduced by the developers include such aspects as the private sector's influence on the society, and the presence of real-life problems and events (e.g. climate change, financial crisis). The graphics have vastly improved, although the gameplay is still mostly based on charts, statistics, and so on.

Continuation of an extremely complex strategy game. Once again we play the role of the leader of a fictitious state. We strive to win every election.

A turn-based strategy game in which we play the role of president or prime minister of a fictitious democratic country, which belongs to the category of political simulators. By taking a number of decisions in seven key aspects of the functioning of the state, we try to meet the expectations of many different political parties, as well as social and professional groups.