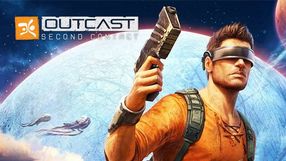 A refreshed version of a third-person perspective action-adventure game from 1999. The remake was prepared by Appeal – a reincarnation of the studio responsible for the original version. Outcast: Second Contact takes place in a science-fiction world, inspired by Stargate – a popular fictional universe, depicted in a number of movies and TV series. When USA sends a research probe into space, the device gets destroyed by the alien race of Talans, creating a black hole which is a direct threat to Earth. To save the world from destruction, humanity sends a group of scientists protected by a seasoned military veteran, Cutter Slade. When it comes to mechanics, the game is a mix of different genres, offering an open world and freedom of exploration, conversation, and performing tasks. Variety is definitely one of the strong points of the game: we face numerous logical puzzles, but dynamic arcade sequences are perhaps the main element of the gameplay. During those, Outcast becomes a classic third-person perspective shooter.

An action-adventure game created by the French studio Fresh3D. Outcast 1.1 is a refreshed version of an acclaimed game developed by Appeal and released back in 1999. The player is taken to the mysterious planet Adelpha, inhabited by the civilization of Talan. The player assumes the role of a retired soldier sent there to protect three scientists and find a probe that has turned out to be a threat to the entire Earth. Hailed as the messiah of the Talan, the protagonist has to gain reputation among them and liberate them from an evil tyrant. The game is played from a third-person view and for the most part, the player explores the world of Adelpha, talks to characters they encounter, completes both assignments related to the main story and side quests, but also solves puzzles and fights hostiles. Compared to the original release, the game offers slightly improved visuals, supports modern-day operating systems and high resolution settings, and features a remodeled user interface.

Action adventure game set in a parallel world called Adelpha. We play the role of the American commander, Cutter Slade, who, together with three scientists and the Talan race, tries to save the world from extinction.

The second part of the action adventure game Outcast, created by the Belgian Appeal team. The player as the main character named Cutter Slade must save Talan civilizations from extinction.