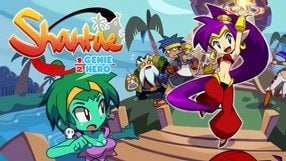 Two-dimensional platformer developed by the team at Way Forward Technologies. The game is another entry in a series that originally launched in 2002 on Game Boy Color. The story of Shantae: Half-Genie Hero takes place in fairy tale-like land, inspired by the One Thousand and One Nights. A half-genie, half-human heroine takes off to a different dimension to fight against a recklessly freed ancient evil. Gameplay is based on the Castlevania and Metroid series, so it comes down to exploration, solving puzzles and fighting enemies, including challenging bosses. Heroine's main weapons are her incredibly strong hair and the ability to change into magical beasts by performing certain dancing moves. As we progress our protagonist gathers experience points, which she uses to unlock more skills – namely, changing into new beasts.