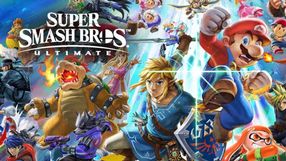 Another entry in the fighting game series that began in 1999 and is an exclusive franchise of Nintendo’s consoles. The most characteristic feature of Super Smash Bros. is the appearance of characters known from other top-selling series of the Japanese developer. It isn’t different this time, with over 50 characters available, known from such franchises as Super Mario, Donkey Kong, Pokemon, or Legend of Zelda. The roster also includes completely new and previously unavailable fighters from Mega-man, Pac-man, Street Fighter, Final Fantasy, Animal Crossing, and Bayonetta. In terms of gameplay, the title remains true to the tradition of previous games in the series, giving us a unique mix, which requires more than simply pummeling your opponents. Each skirmish takes place on a special, multilevel arena, and the gameplay may change during the battle, in a more platform game manner.

A sequel to the unusual fighting game, Super Smash Bros., from 2001, which was one of the most popular productions released for the Nintendo GameCube console. The characteristic feature of the series is the fact that fighters are the most famous heroes from Nintendo’s games, with such characters as the plumber Mario, Link from The Legend of Zelda, pink Kirby and his eternal enemy Meta Knight, Pikachu, and even Solid Snake – main protagonist of the Metal Gear Solid series. The game stands out with a huge amount of comedy and is far from being a typical fighting game, employing many elements from platformer games. In Super Smash Bros. Brawl, battles take place on multilevel arenas, and numerous gadgets can help help you in achieving victory or complementing unique attacks and special moves of each fighter. A strong point of the game is its multiplayer mode for up to 4 players, which allows you to duel with people from all around the world.

Super Smash Bros. Melee is a continuation of the impressive combat game from 1999, designed exclusively for the stationary system Nintendo 64. Sequel is available only to the owners of the successor to the platform, i.e. GameCube console.