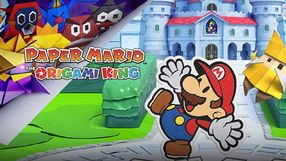 Another installment in a series of popular RPGs brought by Nintendo and created specifically for Wii U. The player is taken to the Prism island - a place which was once very beautiful but is now losing its colors for unknown reasons. Mario's task is to discover the source of this terrible situation and save the island. The game offers interesting mechanics that distinguish this title from other role-playing games. The player is required to color blank spots in the game world, but to do so, Mario needs to equip a special hammer. Hitting things with it results in colors being restored in the area, characters getting revived and prisoners released. For doing all of this, the player is given golden coins. Interestingly, the player is engaged in coloring even in combat, but instead of coloring parts of the game world, special cards become their targets, representing different kinds of attacks. In terms of visuals, the game combines three-dimensional environments with flat, "paper" characters. Paper Mario: Color Splash is a very colorful game as its very title suggests, resembling in this aspect other games featuring the famous plumber.

Paper Mario Sticker Star is a combination of an RPG game with a platformer, in which we once again help Mario free Princess Peach. This is an improved conversion of a hit that originally appeared on the Nintendo 64 console. The stages are constructed in two or three dimensions. In many of them, we can deviate from the beaten path and look for hidden treasures or coins.

Super Paper Mario is another hybrid of platformer and cRPG elements, presenting the adventures of the most famous electronic-entertainment plumber.

Paper Mario 2 is a continuation of the adventures of the famous plumber. Again, we are faced with the task of saving the princess from the hands of the evil Koopa. Sequel has quite strong cRPG accents and numerous riddles and arcade elements.