An arcade action game developed by Ngames Limited for mobile devices. The title takes the player to the post-apocalyptic universe known from the comics in which humanity faces the attacks of giant beasts  the Titans. The survivors have managed to hide in a grand city, but after a few decades of peace the defense walls were breached. Only fearless warriors can face the colossal opponents and the player assumes the role of one of them. The gameplay of Attack on Titan Mobile focuses on battles against the titular adversaries  the protagonist moves automatically and the player executes attacks and maneuvers by performing various gestures. As the player progresses in the game, the protagonist becomes stronger and can face stronger enemies. The game features decent, three-dimensional graphics that use style similar to the comic it is based on.

A sequel to the 2016 game Attack on Titan: Wings of Freedom. Attack on Titan 2 (also known in Europe as A.O.T. 2) was developed by Omega Force (the creators of e.g. Dynasty Warriors), which belongs to Koei Tecmo. The story was based on the second season of the anime series, but thanks to the cooperation of the franchise's original creator Hajime Isayama, it also features new plot threads. The production is a TPP action game. You play as trained warriors, who fight the Titans  gigantic humanoid creatures. The second installment features more playable characters and improved controls, which also gives you more freedom. The game also allows you not only to fight monsters, but also get to know the key characters. 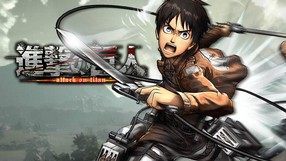 A third-person action game developed by experienced Japanese developer Omega Force (Dynasty Warriors, Samurai Warriors) and an adaption of highly popular anime TV series and manga, originally known as Shingeki no Kyojin. The plot is based on the comic books and takes us to grim, post-apocalyptic world, in which the remnants of humanity enclosed themselves in a series of towering walls after being nearly driven to extinction by gigantic Titans. Unlike the previous production based on the Attack on Titan franchise  a visual novel, which is a genre rather unpopular in western countries  this time we receive a pure action game, concentrating mainly on the fights themselves. The game implements high quality 3D visuals, which use the cel shading technology to emphasize comic origins of the game.

Attack on Titan: Humanity in Chains

Three-dimensional action game based on the famous manga and anime Attack on Titan. In production, we play the role of members of the elite Scout Regiment, and our task is to stop the attacking Titans. The further fate of humanity depends on the success of the action.