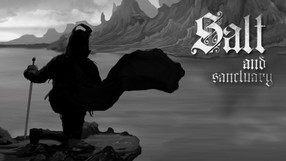 A dark 2D platformer with RPG elements, developed by the team of Ska Studios, known for its original and equally brutal productions The Dishwasher and Charlie Murder. In Salt and Sanctuary we take on the form of a pirate whose ship crashes near a mysterious island inhabited by hordes of drowned and their powerful masters. By eliminating hordes of enemies and bosses the protagonist gradually discovers the secrets of the island, and thanks to the raw materials he acquires, such as gold and salt, develops his equipment and skills when visiting safe enclaves (titular sanctuaries). The hero has a considerable range of weapons and magic skills at his disposal, and the key element is the proper selection, because too much unnecessary equipment negatively affects the protagonist's mobility and special abilities. The game features an extremely gloomy atmosphere and hand-drawn artwork, typical for the studio's early productions.