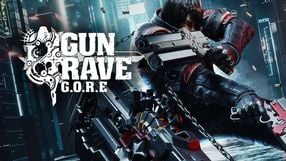 An expanded and refreshed edition of a 2002 action game called Gungrave, which has been published on PlayStation 2 and based on an anime series under the same title. This remastered edition has been designed to support Virtual Reality headgear. The story of the game includes the episodes from the original as well as a number of new ones – the player is taken to a futuristic city full of criminals and ruled with iron fist by an organization known as Millennion. During the game, one assumes the role of a person brought back to life, whose main objective is to avenge his death and stop the evil plans of his former best friend Harry Macdowell. Gungrave VR is a hybrid of an action game and spectacular shooter, in which one observes the action from the third-person perspective, however, in combat, the camera switches to the first-person perspective. The gameplay revolves around exterminating hordes of enemies using a wide range of weapons – the main protagonist can utilize also the so-called Graveyard Special, which is a unique execution he can perform on the encountered bosses.

Gungrave: Overdose is the second part of an action game released in 2002 by SEGA. The company RED Entertainment is responsible for its creation, which made sure that nobody gets bored while having fun.

Sharp shooting is what console users also like. Gungrave had a huge potential, but it was not used in such a way that the game could be remembered with baked goods on the face after its completion.