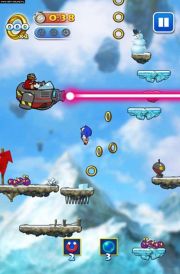 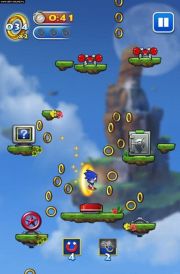 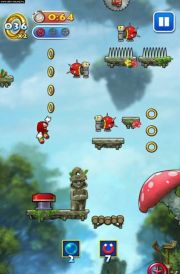 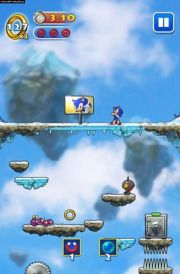 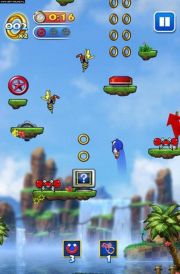 Sonic Jump is a 2D mobile platformer. The game was developed by Hardlight, a studio belonging to Sega. Sonic Jump was Hardlight's debut work. Later, the developer produced other titles belonging to this series, such as Sonic Dash or Sonic Jump Fever.

Sonic Jump doesn't offer a complex story. At the beginning of the game, the evil Doctor Eggman kidnaps the animals and closes them in cages. Then, he escapes high above the clouds. Our character is a witness to this crime and sets off in pursuit. There are a few moments in the game where we catch up with the villain and defeat him in a duel, causing several animals to fall out of his ship. However, the villain always manages to escape.

Sonic Jump is a very unusual production for this series because we don't rush forward. Instead, the blue hedgehog must move up, jumping from platform to platform, collecting items, avoiding traps and eliminating enemies. The controls are simple and are based only on tilting the device to the left or right.

The gameplay in Sonic Jump is enriched by occasional boss battles. During each of them, our opponent is Dr. Eggman, but his attacks and tactics change. An additional attraction is the ability to unlock characters other than Sonic - each hero has a different special skill.

Sonic Jump offers a story mode with manually designed levels. As part of it, we have to overcome dozens of stages set in locations known to fans of the series. There is also an arcade mode where the map is randomly generated and it never ends. Sooner or later, a player will make a mistake causing the game over. Winning is impossible and all the fun comes down to moving as high as possible.

The game doesn't have a traditional multiplayer mode. We can only compete with other players in rankings.

On the day of its premiere in 2012, Sonic Jump was recognized as the clone of the then record-breaking Doodle Jump. In reality, however, it is a remake of a mobile game, which was released in 2006, so the authors can't be accused of lacking originality. In fact, it was the first game of this type.