Super Meat Boy: Forever for PC, SWITCH and etc. is another game developed by the independent studio Team Meat, creators of games like The Binding of Isaac and Mew Genics. The game in question is the second one in the Super Meat Boy series, but serves more as a spin-off than a direct sequel.

Once again we play as the titular Meat Boy, but this time we do not have full control over him. He continuously runs ahead, we can only help him avoid all sorts of traps and obstacles. Super Meat Boy: Forever for PC, SWITCH and etc. features a single player campaign comprising six chapters. As we play, we will not only jump around, but also fight with powerful bosses. In addition to single player, the game offers the so-called Endless mode where we have to run as far as possible and survive as long as possible. Our score is then published on worldwide online rankings when we can compare our times with the achievements of other players. 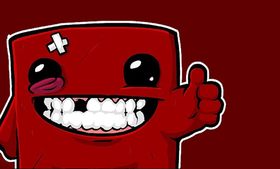