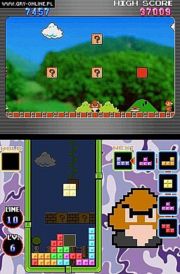 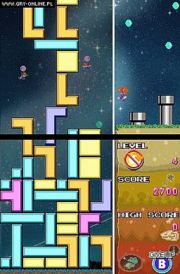 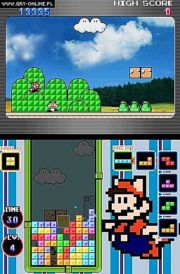 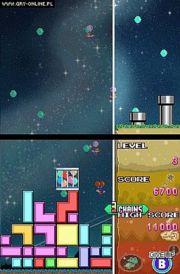 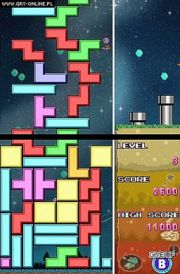 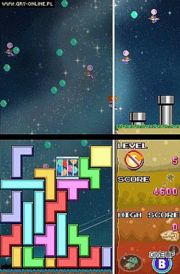 The classic gets the full Nintendo DS treatment.

* Innovative use of DS stylus and dual screens

* Incredible artwork inspired by favorite Nintendo games like Super Mario Bros. and The Legend of Zelda

* 10 DS players can battle with only one Tetris DS card!

* Battle on the Nintendo Wi-Fi Connection

Each of the six modes of play features a theme based on a classic Nintendo game, such as Super Mario Bros., The Legend of Zelda or Metroid. The traditional Tetriminos (falling blocks) and line-clearing strategy remain the staples of the game, but the touch screen adds a new element of interactivity.

Some modes give players special Tetris puzzles to solve. Others feature head-to-head action between two players, or massive wireless battles between 10 DS users, even if only one player has a game card. Players also can log onto Nintendo Wi-Fi Connection to compete in two- or four-player battles. Tetris DS even includes a point-based rating system based on players' battle results. Opponents can see one another's ratings, which indicate their skill levels.

Every gamer, whether competitive or casual, will find a way to reconnect with one of the most popular puzzle games in history. Look for more details about the new game play modes on Nintendo.com in the weeks leading up to the game's release.

How does one take Tetris to the next level? Sure, the 10-player wireless multiplayer function is sweet. Playing via the Nintendo Wi-Fi Connection with Tetris lovers around the world will no doubt be awesome. What takes this Tetris into uncharted territory, however, is the ability to touch the pieces.

With Balloon Fighter as the backdrop, Touch mode in Tetris DS challenges you to clear lines by moving a heap of puzzle pieces into empty slots. At the top of that heap is a cage of balloons. If you can get rid of most the pieces and make that cage hit the ground, the cage will open and the balloons will be set free.

You'll use a stylus to drag and move blocks from a giant stack to make them fall into horizontal lines. In early levels, you can tap blocks to rotate them just to fit into the open spaces. The mode really gets hard when this option is taken away and you have to better plan your moves. You have as much time as you need, so it plays very differently from the other frantic modes.

One of the modes available for play on Nintendo Wi-Fi Connection, Push Mode lets you battle it out against an opponent in the ultimate Tetris tug-of-war.

Themed to the arcade classic Donkey Kong, players must clear lines in an attempt to push the other player to the edge of the screen. Clearing two lines at a time moves the screen down and pushes your opponent into the red zone.

The frantic action leads to the game turning at any moment. While you're setting your blocks up to make your combo, watch out not to build too high. If your opponent gives you a good push or two, your game could be over quickly.

In addition to playing on Nintendo Wi-Fi Connection, you can play Push Mode over local wireless.