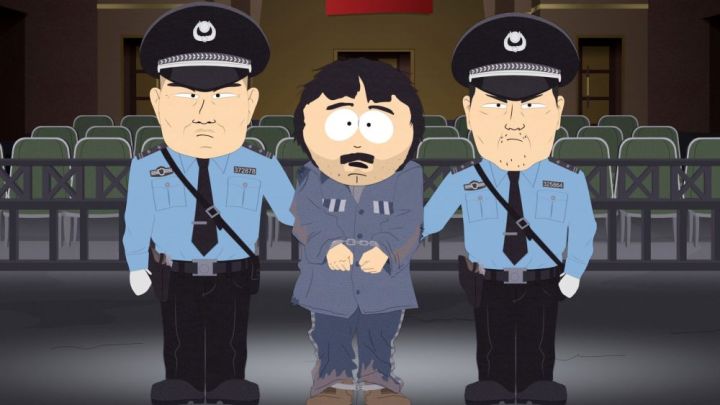 South Park has been released continuously since 1997.
IN A NUTSHELL:

The second episode of season 23 of South Park, titled Band In China touched upon the sensitive issue of censorship in China. The series' animators Trey Parker and Matt Stone have openly criticised the attitude of large Hollywood studios (such as Disney), which adapt their productions to the local market, putting their own interests ahead of those of human rights. In Band In China, one of the characters, Randy Marsh, is arrested and sent to a Chinese labor camp for trafficking marijuana, and Stan, Jimmy, Kenny and Butters form a metal band that is becoming so popular that it attracts the attention of a film producer. He wants to make a biography of the band, but the script has to be accepted by the Chinese censors first, which turns out to be much more difficult than it might have seemed at the beginning.

The reaction of Chinese authorities was swift. In less than a week after the premiere of the controversial episode, all references to the existence of the series disappeared from the Chinese Internet. Searching for "South Park" in both English and Chinese does not bring any results, e.g. on Weibo (a popular social networking platform in China), and all video clips and episodes of the series have disappeared from Youku (a video hosting site). Although South Park has never been officially distributed in China, it has a large group of dedicated fans downloading and streaming the series from unofficial sources.

The series' creators reacted to the news of censorship in their typical, ridiculous way:

The NBA jab refers to Daryl Morey, manager of Houston Rockets, who expressed support for the protesters in Hong Kong in a Twitter post and then withdrew his words when Chinese television and sponsors threatened to stop backing his. The similarity of the leader of China Xi Jinping to Winnie the Pooh is an Internet meme hated by the local government, about which we wrote on the occasion of the Taiwanese game Devotion.