It can be said that matchmaking is the heart of any online game and it is essential for the proper functioning of a game's biology. If we use this comparison, it can also be said that CS:GO is suffering from a severe arrhythmia, or rather, was suffering, because yesterday the developers performed a cardiac surgery.

Behind this medical metaphor is the fact that yesterday's update to Global Offensive brought significant changes to the game's matchmaking, which will affect virtually all players.

New ranks for everyone

The August 1 update temporarily resets the ranks of all players. In order to get a new division, you will need one match win - just like the rank reset after a 30-day absence from the game. So you will remain without a rank until the first win after the reset.

Once you get a new rank, however, chances are that it will be significantly different from the one you had before. 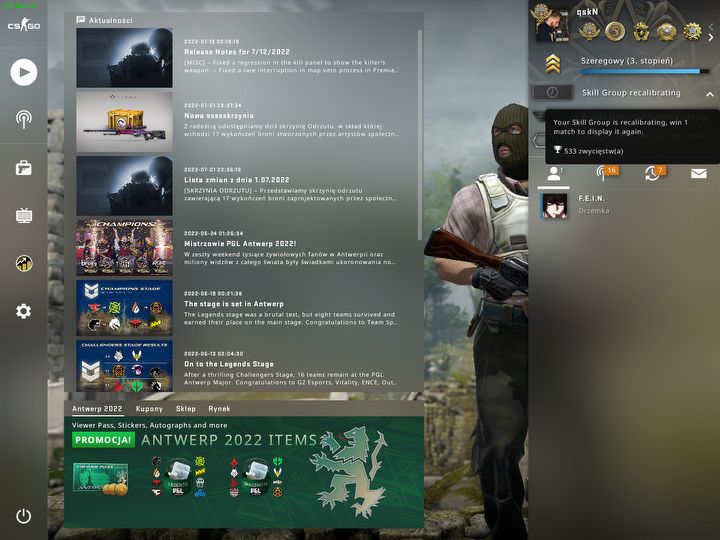 A question mark will appear in place of our rank. Source: own materials

What Valve is trying to achieve in the latest update is a more even distribution of players on the 18-level rank scale (from Silver I to Global Elite).

Until now, the distribution of players has been uneven on many servers, and thus, for example, on US servers, most players landed in Silver (the lowest category), making it harder to get out of it due to the accumulation of players there. In addition, the divisions often did not match the actual skills of the players.

The problem was neatly summarized in the following video by youtuber Mr. Maxim:

Will the rank reset bring Counter-Strike (and above all - its players) a solution to the problem? It's possible; this is not the first such move on Valve's part, as matchmaking has been subjected to resets several times in the game's history, and this process has usually worked in favor of the game's ecosystem.