The PC version of Cyberpunk 2077 had a good launch, but after that things only got worse. CD Projekt RED spent months working on patches and it seems that it finally started to show results and the game is slowly regaining sympathy of the players.

This is best illustrated by the player ratings on Steam. For the past few weeks, the share of positive ratings in the last 30 days has been steadily growing. Currently, it is 68%, so just 2% more and CP2077's overall will be positive, instead of mixed. In the months following the release, this score has steadily declined. On March 1, it went below 70%, and then continued its downward spiral. Among the user reviews issued in the third month of this year, only 59% were positive. 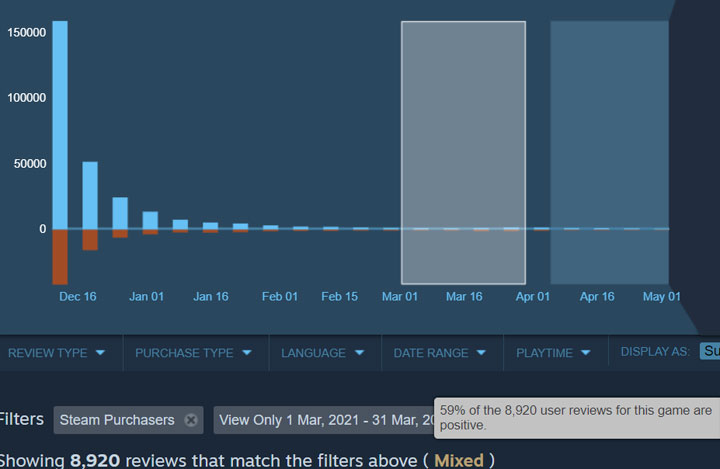 March was the worst for the game, when only 59% of user reviews were positive.

Patch 1.2, which remains the biggest update to date, seems to have been a breakthrough. While the game still leaves a lot to be desired even after installing it, the positive change is clear and it has been reflected in the game's reception.

Back in April, 67% of Steam users has a positive opinion about Cyberpunk 2077. Today the result from the last 30 days is 68%, so the game is slowly regaining score. 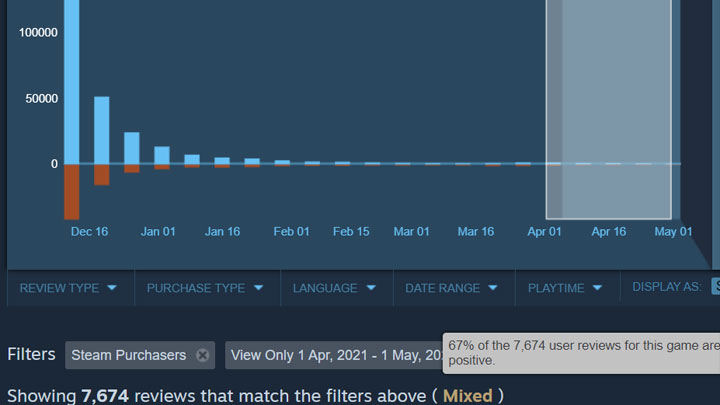 April turned out to be a much better month for the game than March.

It also seems like the devs managed to stop the outflow of players. Activity figures had been declining at a rapid pace since launch day, but have started to stabilize in recent weeks. This past Sunday, at the hottest time of the day, Cyberpunk 2077 was being played on Steam by 17,908 players at the same time, which is practically the same as the week before.

The game will never return to the records from the launch period, when over a million people at once used to play, but stopping the downward trend is good news for the devs, especially taking into account the fact that this is a game without multiplayer mode. 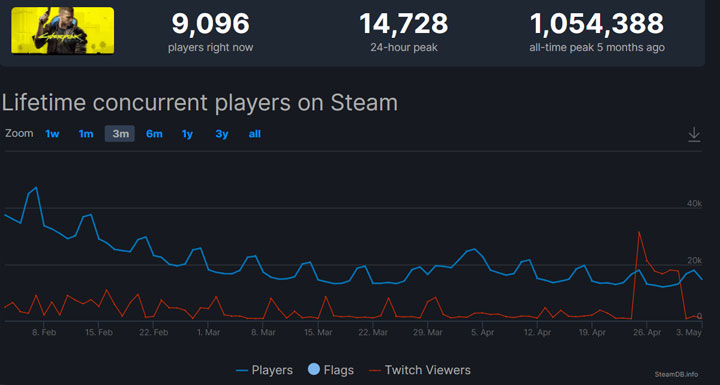 CD Projekt RED still has a lot of work ahead of it before Cyberpunk 2077 reaches a fully satisfying quality. It seems, however, that the effort put into fixing the game has finally begun to bear fruit, and the worst is probably behind us. It remains to be hoped that the repair process will continue and, before long, CP2077 will finally become the game that players have come to expect.

Cyberpunk 2077 was released on December 10, 2020 on PC, PS4, Xbox One and Google Stadia. The game debuted in a terrible technical condition, so from the day of release we receive new patches on a fairly regular basis. The devs have recently assured that they will not abandon the game, so we can expect many more updates.

Devs Have to Pay for Cross-play on PlayStation

Leak Suggests Elden Ring Only in 2022

WoW Classic Character Cloning Will be Much Cheaper

Courtyard Oasis Kit Will Add Moroccan Styles to The Sims 4