Last year's Warhammer 40,000: Darktide, a co-op FPS from the developer ofWarhammer: Vermintide, studio Fatshark, was not among the fully successful titles. The game was criticized for technical errors, poor optimization and aggressive monetization. Now the developers have admitted that they let players down and have announced how they intend to fix the game. 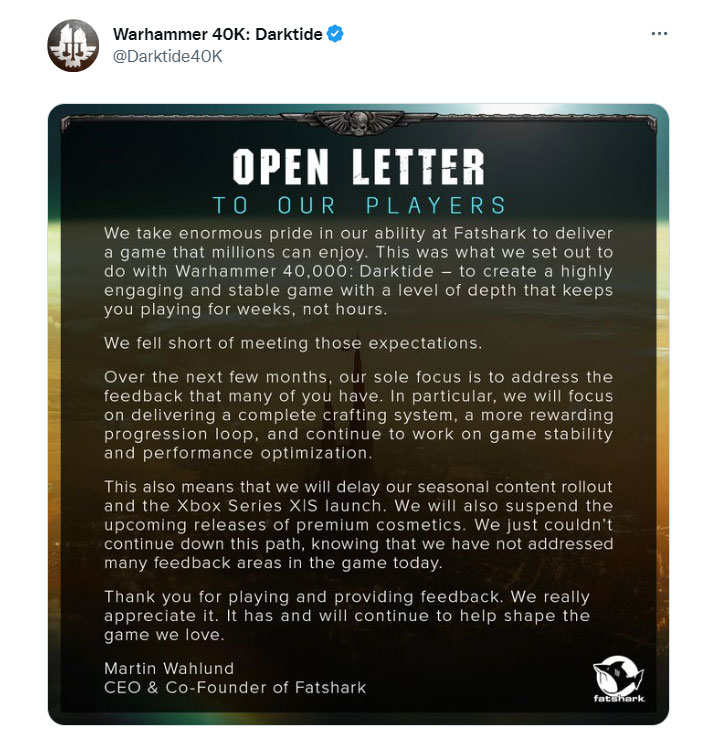 Fan reactions to the announcement are mixed. Some of them praise Fatshark for sincerity and willingness to fix the game, but others stress that such a declaration came almost two months after the release, which is far too late. Many players have also lost faith in the studio's abilities.

Recall that Warhammer 40,000: Darktide is for now available only on PC. The game is also available through Game Pass since release.

On the day of its debut, the game was met with warm reception on Steam - 79% of player reviews were positive. After that, however, various problems of the game began to dampen the enthusiasm. Currently, only 55% of Steam user reviews praise Darktide, and counting only those from the last 30 days - only 34%, which is categorized as "mostly negative" reception.

The number of players is also dwindling at a rapid pace. Yesterday, at the hottest time of the day, Warhammer 40,000: Darktide was played by 8470 concurrent users on Steam, while shortly after its release the game recorded daily scores of more than 100,000 players.