We are only a few days away from the release of Days Gone. No wonder, therefore, that recently the devs regularly released fresh materials and information. The latest set of facts comes from an interview published on PlayStation Access.

The devs revealed that they spent a lot of time developing a system to control the behavior of artificial intelligence. Infected people will attack not only the player but sometimes also each other. There will also be fights between them and animals.

During the game we will be forced to collect the ears of the infected because it's the only way to prove our usefulness to the settlements of survivors. These shelters are supposed to have different specialties, allowing us to upgrade e.g. weapons or motorcycles. During the game we will have the opportunity to save people and decide which settlement to send them to, thus increasing its size, which will provide access to more advanced upgrades. 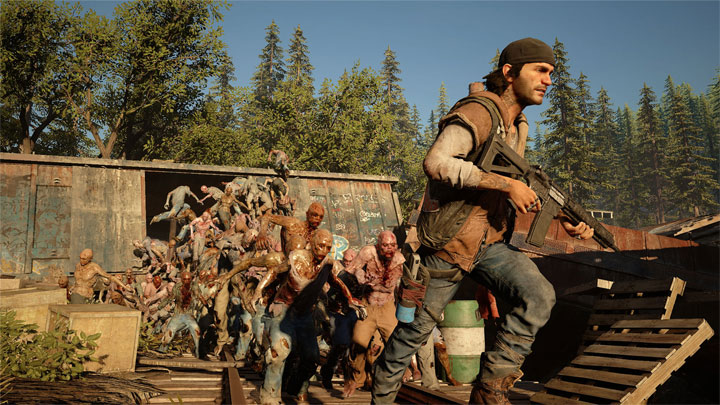 The biggest hordes in the game will include 500 infected.

The devs designed combat around three main ways to eliminate enemies. The first one is the stealth approach, in which a crossbow will help, allowing silent kills from a distance and the use of special bolts, e.g. with the essence of the infected, which will cause the target to attack its companions. The second method of combat will focus on setting traps and the third on direct confrontations. Melee weapons are supposed to wear out, but if it breaks down, we can fix it.

The world of Days Gone is supposed to be roamed by forty infected hordes. Their sizes will vary from 50 to 500 units. The game will track their numbers. If we reduce the ranks of a given group, it will remain weakened until it encounters single individuals who will join it. In addition, there will be three additional hordes, used especially in story sequences.

The creators also revealed interesting information about Unreal Engine 4 technology powering the game. It turns out that the technology does not support two-wheeled vehicles. Developers have dealt with this problem in an unusual way. A motorcycle actually has four wheels, but two of them are invisible and do not interact with the environment.

Let's remind that Days Gone is coming exclusively to PlayStation 4. The game will debut on April 26, this year.