Ten days before the release of Doom Eternal, a video showing the customization options available for the game's main character appeared on the web. Doom Slayer will be able to dress up not only in various color versions of the basic armor but also in a number of additional outfits, which we will see both in multiplayer mode and in the single-player campaign (for example in photo mode). The list of planned costumes includes a gladiator-like outfit, an armor evoking associations with the one from the first installment of the series, and even... a white unicorn costume with pink accents (dem shoes...) and wings on its back. Access to them (as well as to extra animations and podiums) will be unlocked as we progress. 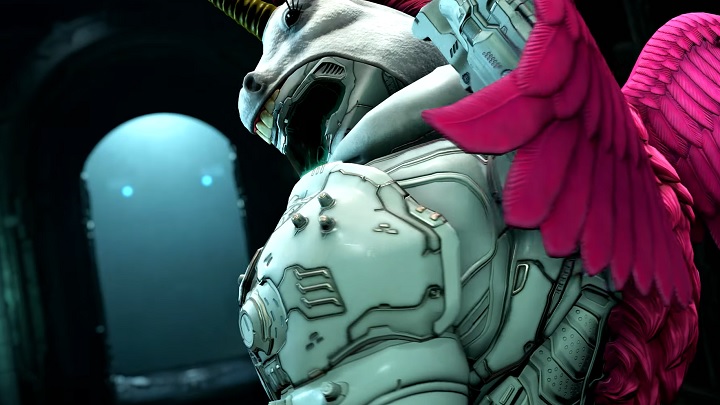 The demons called him a queer, he called them a hearse.

The last of these costumes will only be available to Twitch Prime subscribers. As you can read on Bethesda Softworks' official website, in addition to the skin itself, DOOMicorn will include a number of extras that include its bonus variants, animations (such as "Horsing Around" or "Clip Clop"), a headline and a player icon. To unlock this content, simply link your Bethesda.net account to your Twitch account. The promotion will run from March 20 to April 21.

Doom Eternal will be coming to PC, PlayStation 4, Xbox One and Stadia on March 20; the title will also appear later on Nintendo Switch. You can read about the changes introduced by id Software to the 2016 Doom in our preview.