Euro Truck Simulator 2 fans will still have to wait for the Iberia expansion. However, SCS Software is preparing a few additional innovations which will make the wait a little more pleasant. The most important of these is an overhaul of the graphics engine, which mainly involves an upgrade of the lighting system. Update to version 1.40 will make the game world significantly change its visual face. How much - it is best seen in a direct comparison video published on YouTube.

The new lighting system allows for a wider use of HDR, better adaptation of color palette to the time of day and weather conditions.

"Our art teams had to make a lot of changes across the whole catalog of our in-game world objects; including a majority of the in-game 2D/3D assets, textures, and materials to better work with the new physical model of the new light system."

Skyboxes have also been replaced, and now have a higher resolution. The colour palette of the backgrounds is much better. Improved diffuse lighting - sunsets and mist effects look more natural. Devs fixed one of the most annoying bugs in some places - unrealistic lighting of buildings at night (all windows are "lit"). Additionally, street lamps now have the correct color. Deliveries made after dark will give much more pleasure.

The devs claim that they tried to optimize the changes in such a way that they did not significantly affect performance. Playing is possible on "mid-range GPUs and below". We can see how true these words are - the version of the game that includes the new lighting is available for download as Open Beta 1.40. For Steam, just select "Public Beta 1.40" in ETS2 properties. Please note that the new content is still being worked on, and many things may contain bugs.

The update isn't just about changes to the light system, of course. The refresh of Germany has entered its final phase - in version 1.40 all motorways and roads in this part of Europe should already be changed. New intersections have been added near some German cities. New towns related to the upcoming Iberia DLC have appeared in the Viva la France expansion area. As the icing on the cake, owners of the Super Stripes Paint Jobs pack will receive two new paint jobs. 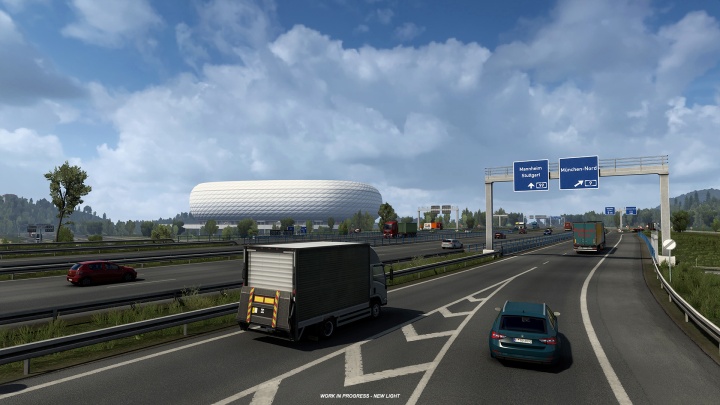 Cara Dune Cut From The Mandalorian Along With Gina Carano