Quite recently we informed that David Beckham will return to FIFA 21. The Englishman is now available in Ultimate Team and Volta modes!

David Beckham has already received an icon card in Ultimate Team mode on December 4. At the time of writing this news we have to pay as much as a million coins for it on PlayStation and we can't get it on Xbox and PCs at all (most likely due to the huge interest). Another option is to count on the luck of finding it in a pack, but that's a hopeless case, as the chances of that happening are as low winning at Powerball.

Fortunately, EA has come up with an interesting and most importantly, free alternative for gamers who can't afford to buy or miss his card. Anyone who played at least one Ultimate Team game between October 9, 2020, and January 15, 2021, will receive a non-exchangeable special Beckham's Real Madrid FUT card. Its overall score is 86 points, based on the Englishman's performance against Real Betis in the 2003/2004 season. It differs from the icon in that 'Becks' in that version is a Real player, so he has full sync only with Spanish league players and other Englishmen. His stats are also slightly worse than on the million-coin card, but not enough to make playing with him unpleasant.

David Beckham's most important features in FIFA 21 are excellent passes and some of the best free-kicks . If you like to shoot from afar, the Englishman will become your best friend, as his sophisticated off-field shots are unrivaled at the moment. The only major disadvantage of Beckham is his speed, which has been rated at only 75 points. For this reason, on average, he works well on the wing and it is better to move him inside the field during the match. 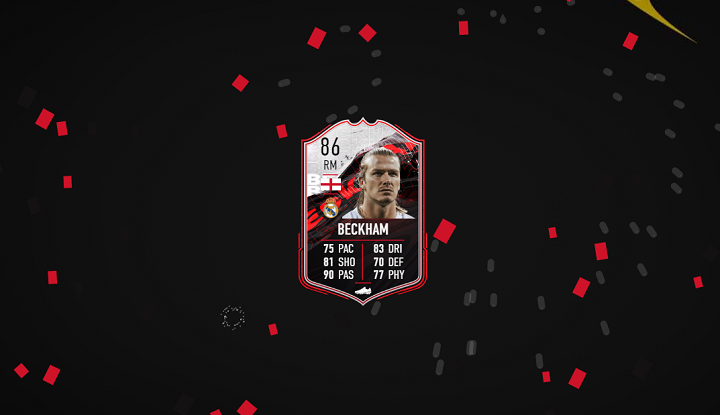 Who will test the famous Englishman in his squad?

The return of 'Becks' also concerns the street Volta mode. Everyone who logged into the game between October 9 and January 15, 2021, and played at least one game on a Volta will receive a special version of 'Groundbreaker' David Beckham.

FIFA 21 launched on PC, Xbox One, PS4 and Nintendo Switch on October 9. On December 4, 2020, it was released on PS5 and Xbox Series X/S. The next-gen version features much better and more realistic visuals and improved ball and player physics.

CD Projekt Explains Cyberpunk 2077 Situation at Conference With Board Members

 Funding the Dream in Gaming Webinar Will Teach You Exactly That