League of Legends can boast a lot of characters and even more skills (currently well over 600). One player has created a quiz to test your knowledge of the subject.

You can find the quiz at League Skill Issue. Its rules are trivially simple - you have to match one of the icons visible on the screen with the provided skill name.. Each approach you start with three lives, and their loss means defeat, of course. 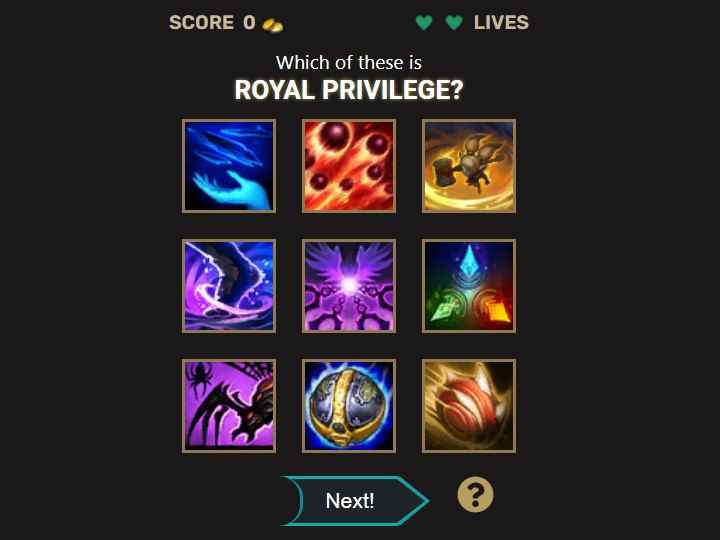 Currently, the quiz can be solved at two difficulty levels: Novice and Veteran. They differ in the number of icons visible on the screen. The easier level has nine of them, while the more difficult level has sixteen. Importantly, the quiz also includes passive skills.

LoL players were quick to get in on the fun, bragging about their scores. One of the highest, if not the highest so far, is 509 correctly guessed skills. League Skill Issue was also tried out by a Riot Games employee, who praised Evanescent, the website's author, for the idea.

We can expect the website to get some more improvements, as players pointed out repetitive skills and tossed around ideas to make the gameplay more interesting, such as introducing a time limit.

An alternative to League Skill Issue

If you like this type of games, it is very possible that you will also like LoLdle. It can be said that it is LoL edition of Wordle, where you guess the character without any clues. Other game modes are also available, such as guessing a champion by illustration, quote or skill.

Unlike League Skill Issue, LoLdle has a limited number of attempts. After solving each puzzle, you have to wait until midnight to try your hand again.

Backpack Hero - What is Tasty Fly?