Two of the three games included in the Mafia Trilogy compilation, have been released. The game's in question are the remastered version of the second installment of the iconic series and a definitive edition of the third installment. The remake of the first game in the series will be released on August 28, this year. Although the boxed version of the trilogy will make its launch on the same day, the players can already purchase digital version of the pack for $59.99 (they will only wait until August to unlock the remake) or place a pre-order for a boxed version.

At the moment, Mafia II: Definitive Edition can be purchased on Xbox One and PlayStation 4 for $29.99. The title is not yet available on Steam (although it should be soon). The players who own the original in Valve's store will receive a free upgrade to the remastered version.

Mafia III: Definitive Edition is available on Steam as well as Microsoft and PlayStation Store for $29.99 on all platforms. It's also worth noting that owners of the digital version of the original on PC, PlayStation 4 or Xbox One will also receive a free upgrade to the Definitive Edition.

Mafia: Definitive Edition as a standalone game is to be slightly more expensive than the remasters of the second and third installment. 2K Games has priced this title at $39.99; orders can be placed on Microsoft's store and on the official website of the franchise. 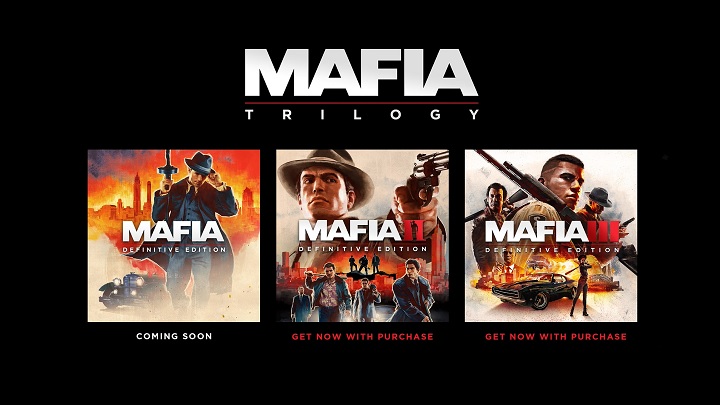 Two of the three games making up the refreshed Mafia trilogy are now available.

The buyers of the remake of the first Mafia can count on the possibility of using Tommy's (the main character's) clothes in the next two parts of the series. The same can be done with the Vito Scaletta costume from the remastered Mafia II and Lincoln Clay's costume from Mafia III: Definitive Edition.

Finally, we have for you a comparison of the original version of the second installment of the series and its remaster, as well as the trailer of the latter.