It's only been a few weeks since Baldur's Gate III's debut in early access, and the game already boasts a large and active modding community. One of the latest notable modifications is Adventurer's Guide to Tamriel. The project enables us to create characters belonging to races featured in the universe of The Elder Scrolls series .

Currently, the mod includes such races as Imperial (Cyrodiil), Breton, Nord, Redguard, Altmer, Bosmer, Dunmer and Orsimer. There were also men and elves in versions known from TES series. Subraces are also available.

The mod is at an early stage of development - the latest version, released a few hours ago, is marked with the number 0.3.0.1, so the author (NellsRelo) warns that many of the elements are still unfinished. In addition, updates to the game itself may cause problems with the operation of the mod in the future, before the creator adjusts his work accordingly. 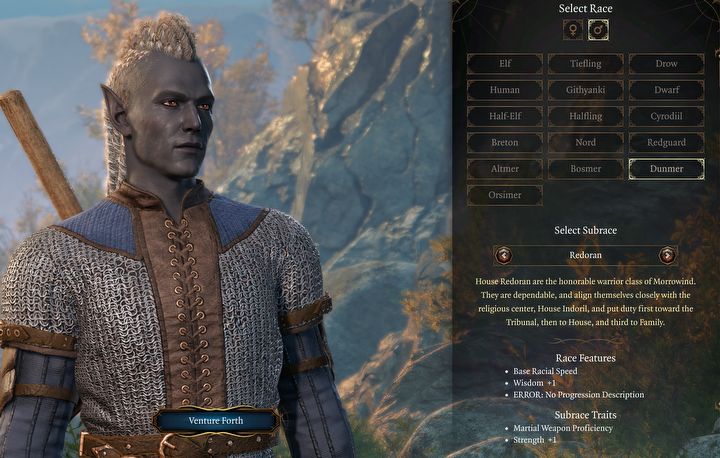 Despite these reservations, Adventurer's Guide to Tamriel is already a remarkable project. It's worth adding that the author doesn't intend to stop at adding races. There are also plans to introduce, among others, spells from The Elder Scrolls universe . NellsRelo didn't have to start from scratch, as a few years ago he started working on adapting the TES universe to Dungeons & Dragons' fifth edition. This means he had a lot of mechanical solutions in mind long before Baldur's Gate III went on sale.

Installing Adventurer's Guide to Tamriel is easy. It is best to use Candor Mod Manager. It supports a number of games, so after starting it we should first select BG3, then use the "Add Mod" option, and then point the application to the .zip mod file (we don't have to unpack it manually). Then select "AdventurersGuide-RacesModule" and install the mod using the "Install Selected Mods" function.