During Nvidias press conference at Consumer Electronic Show the company announced the expansion of their GeForce Now service  soon it will enable PC games streaming to any personal computer or Mac (for now it only serves to stream games from your PC to Android-based SHIELD devices). The only thing you are going to need is a GeForce video card on board (an integrated unit will do) and a special app, via which you will launch games that you own on popular digital platforms, such as Steam, GOG Galaxy, Origin, Uplay or Battle.net. This way you will be able to play the hottest AAA games even on a budget laptop. 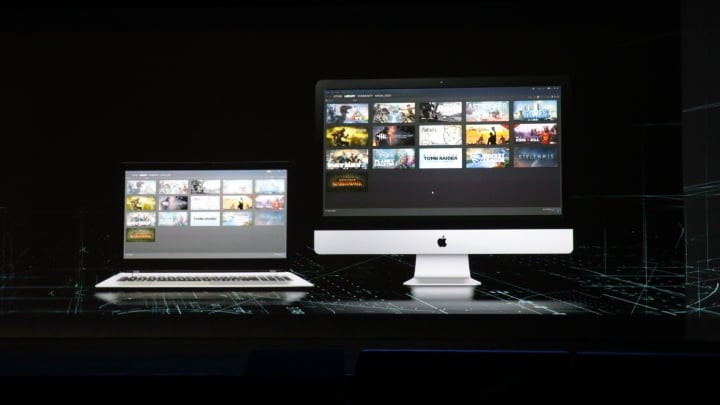 With GeForce Now you will be able to play games like Rocket League and Rise of the Tomb Raider on your iMac or MacBook (source: TechCrunch).

At the show, Nvidias CEO Jen-Hsun Huang used GeForce Now to play Rise of the Tomb Raider on iMac smoothly and in high resolution. Huang also noted that only recently the companys engineers were able to find a way to reduce latency to an acceptable level.

Of course the luxury of playing recent games on your iMac wont come for free  25 hours of gameplay on a virtual PC with GeForce GTX 1060 on board or 10 hours with GeForce GTX 1080 will cost $25. The new GeForce Now will be available in early access to selected residents of the USA in March 2017, with a full version to follow later in spring.