Blizzard Entertainment has already irked fans of Warcraft, Diablo and Overwatch. To this list can now we add esports teams competing in the latter.

During the tournament from this year's Overwatch Contenders series there was a "strike" of players representing teams 01 Esports and Ex Oblivione. After taking their seats, the players de facto didn't play (if you don't count the two Torbjorns hammering each other), ignoring mission objectives and extending the match indefinitely, despite warnings from Blizzard's referees.

"Overwatch Contenders is the Overwatch international league organized by Blizzard. The goal of the series is to scout out talented players to give them a chance to prove themselves and get noticed by talent hunters recruiting to compete in the Overwatch League (hence the name).

The protest took place in response to a controversial situation that occurred while still in the winners' bracket.

On July 27, a day before the duel between Munich eSports and 01 Esports, Jacob "choose" Bronder (the Polish-German representative of the Munich team) wrote to the organizers of Overwatch Contenders regarding Blizzard's strange decision. Well, players were informed that the match would be played in best of 7 format, bo7 for short, which means that the team that wins four games is the winner.

The catch is that according to the tournament's current rules, the bracket finals a. winners' finals should be played in a "best-of-five" (bo5) format. Only in the grand finals would players have to play to four wins. Moreover, players initially received conflicting information from administrators (vide entry by Kevin "Kevh" Hondijk of the Ex Oblivione team).

However, Choose received final confirmation from one of the administrators that the best-of-seven format would indeed be used in the match against 01 Esports. The opposing team received similar information. 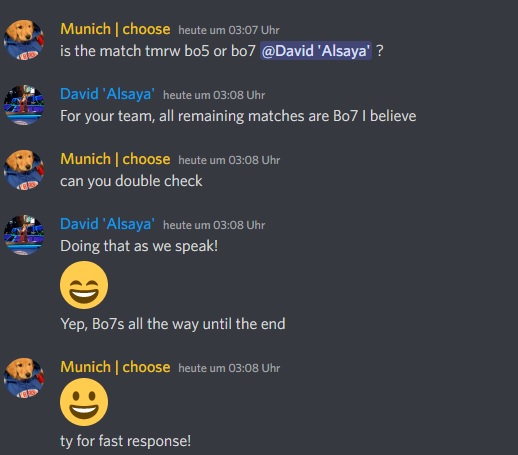 The beginning of the clash was very unfavorable for 01 Esports. The first three duels ended in favor of the opponents, but on the next two maps the team managed to defeat Munich eSports players, thus gaining a chance to reverse the situation (which is always an exciting situation for spectators).

At this point Overwatch Contenders administrators intervened, who abruptly announced that the match was over in favor of Munich eSports. The reason? The duel should have been played in a "best-of-five" format.

The "bo7" information on the website was a "typo," and the organizers had trouble reaching the main administrator (via Dot Esports). As a result, the other administrators had to answer players' questions and make decisions about the tournament themselves. Hence all the confusion.

The fury of the players...

It's easy to imagine the frustration of the Saudi Arabian team. The difference between playing to three and to four wins is not only a matter of player fitness. In competitions (not only in Overwatch) participants may play differently depending on the number of games needed to win the match, for example, putting their opponents' alertness to sleep and testing their habits to suddenly apply a new strategy.

Anyway, there is no need to imagine anything. A recording of a conversation between the players and the chief administrator has hit the web, admittedly no longer available on YouTube, but also uploaded to Streamable. To say that the players were frustrated would be quite an understatement.

The players gave vent to their rage on social media, including Timber "kraandop" Rensen, who tweeted a screenshot of Choose's conversation with an administrator on Discord. He also pointed out that the mention of the "bo7" format was seen also on the tournament's page on GameBattles (albeit the information had already been changed there).

Spectators also joined the protest, expressing their outrage with the hashtag #ContenderStrike on Twitter (where the action trended for some time) and in the broadcast chat during the "strike" of Munich eSports and Ex Oblivione. The latter team also published a statement expressing its outrage at Blizzard's decision and the company's scandalous communication with players. 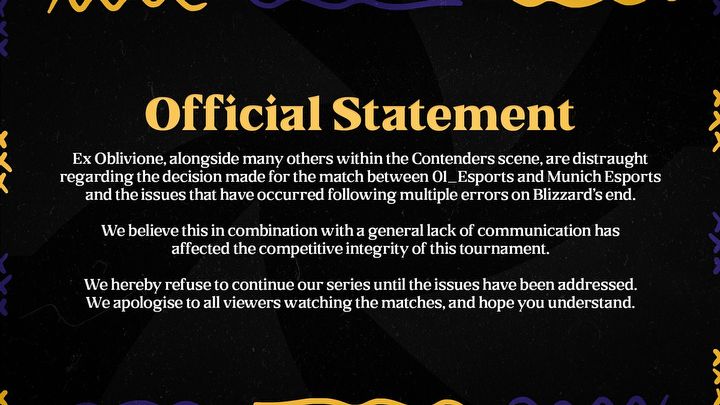 Ex Oblivione refused to continue participating in the Overwatch Contenders tournament pending a review of the case.

The organizers give in

During the match, the judges initially issued a warning to both protesting teams, even threatening to disqualify them and take away their rewards (via Helv on Twitter). Eventually, the broadcast of the tournament was interrupted, and the organizers of Overwatch Contenders published an apology and informed that it would be "most fair" to replay the match in a "bo7" format, as the players had been informed. 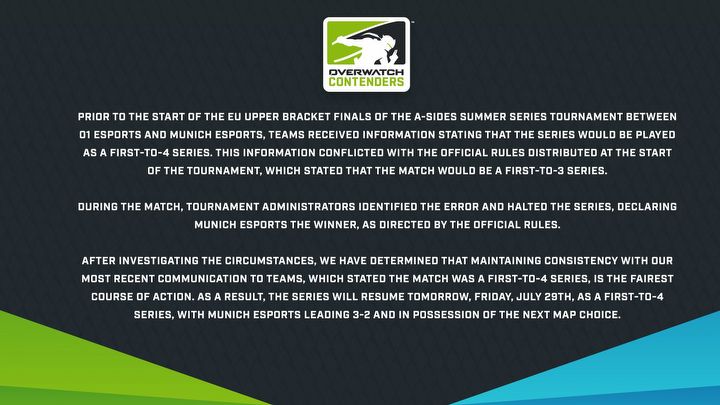 The replay of the Munich eSports vs. 01 Esports match will take place today (via SPORT1), with the state of the game being the same as when the match was interrupted: 01 Esports will be in the lead with a score of 3:2 and the decision to choose the next map.

Although this is somehow the optimal solution in this situation, it did not appease the players. Tournament participants believe that this situation is further evidence of Blizzard's lack of communication with players participating in Overwatch Contenders (via The Verge).

Google Stadia Might Shut Down Later This Summer [UPDATED]

Google Stadia Might Shut Down Later This Summer [UPDATED]

The Lost Wild Shows What Dinosaur Games Should Look Like