Games published by Amazon Games are a one big puzzle. It's not so much about the fact that New World has met a rather tragic fate, but rather that Lost Ark players get banned for nothing, and when they want to appeal the decision, they encounter a lot of problems. The issue of phantom moderation in AGS was brought to notice by one of the wrongly banned users.

What is this ban for? For free

As windrangertv claims in his post, this is already the second situation in which he was banned for nothing. Of course these are not permanent bans, although AGS support thought otherwise (which can be inferred from the content of emails). However, the user quite recently got a week-long ban for alleged cheating.

In fact he was just explaining to other players in the chat, how the location known as Isle of Yearning works in Lost Ark. So it's clear that he did not agree with the decision and tried to appeal. That's when his road through the ordeal began.

First, windrangertv received a very templated response, in which support not only did not respond to his appeal, but also learned that the ban is permanent - which is completely untrue.

After he appealed again, he received a "get lost" type of email stating that AGS was going to do whatever it took to review his appeal and cancel the penalty if necessary. He was also once again given a link to a page where he could appeal the ban. 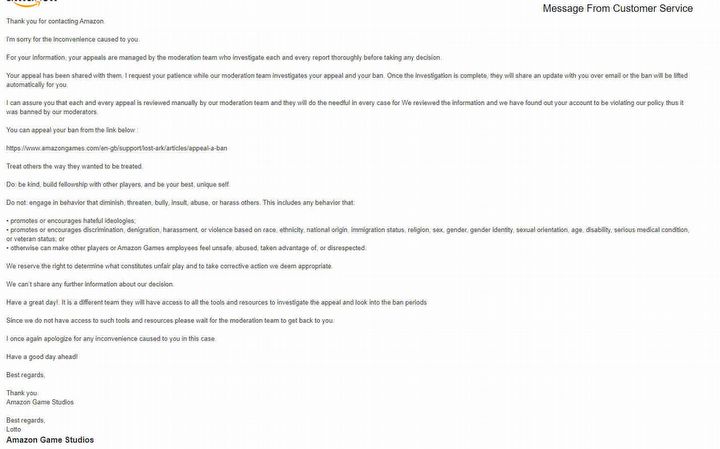 The next step was to contact AGS support by phone - no luck there. Then windrangertv tried to contact someone in the chat on the studio's website. The only thing he got was information about the email, to which you can send an appeal.

The whole situation seems to be one big maze, where everyone is pushing duties to somebody else, without actually solving anything.

In the end, the player was probably contacted by a real person, responsible for community affairs, explaining that his appeal has been forwarded. Meanwhile, the ban he received, officially for cheating, but in fact for offensive language, is unfounded.

AGS has the worst support in the world

There may be many reasons for this, but there is no denying that AGS customer service leaves a lot to be desired. As the author of the post states, he has heard more than once of cases from players of both Lost Ark and New World, who were unjustly banned and their appeals went MIA.

Other users who decided to address the problems windrangertv encountered second him, saying that talking to AGS is hell.

AGS has serious issues when it comes to customer support, I've only dealt with them once and it was enough for me to not want to have to deal with them ever again, they don't just not resolve any of your issues, they even fight you and accuse you of shit, like wtf is wrong with these people lol," wrote mikeyeli.

Judging by the amount of conflicting information the player has received in the space of just a few emails, one can surmise that the customer service is run by a third-party company. This means that the people who are supposed to be helping players don't really have a clue about Lost Ark.

Notice the “do the needful” part of that email,.. only place I’ve ever seen that is in tech support from India. More than likely they are outsourcing their moderation and the overwhelming number of reports are causing them to just copy pasta reasons, assuming that by the time it gets to the right place, your ban will be up and it we be dropped or whoever ends up getting it will rubber stamp it as it’s very hard to prove you didn’t do something," wrote Azrael_Asura.

In any case, the situation is quite bad, and Amazon Games should do something about it as soon as possible. After all, the number of people wanting to contact support will not decrease as time goes on, quite the opposite.

Evil Dead: The Game With Good Ratings and Great Sales