Almost a year after its release, the PlayStation 5 is definitely not among the commodities easily available to the public, but Sony is unlikely to complain about the popularity of its new console. The company's latest financial report reveals that 13.4 million PS5 units had been purchased by September 30th, a figure comparable to that achieved by the PS4 a year after its launch (around 13.5 million units; citing the official PlayStation blog). Only in the company's record-breaking second fiscal quarter of this year (i.e. the period from July to September) 3.3 million consoles were moved. At the same time, only 200,000 last-gen devices were sold.

As you can easily guess, this translated into excellent financial results of Sony. The second fiscal quarter proved to be a record quarter for PlayStation in terms of sales (up 27% over last year). However, both games and most of the company's other divisions reported lower operating profits. In the case of PlayStation, the 21% drop is due to declining sales of the PS4 while selling the PS5 at a loss (as is usually the case with consoles) and presumably due to lower sales of Sony-published products. 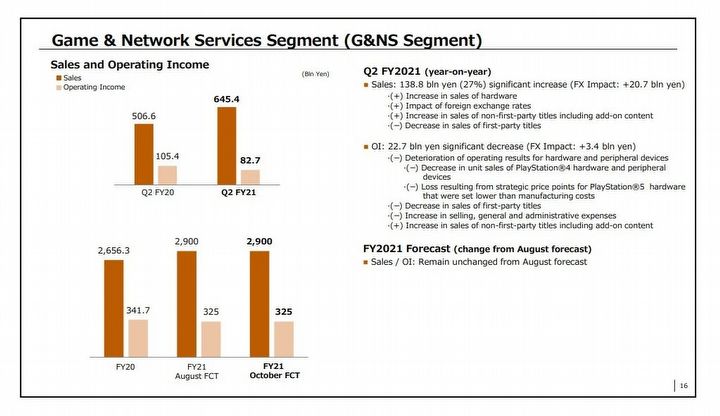 Speaking of which, game sales of 76.4 million copies are clearly worse than a year ago. Titles created by PlayStation studios accounted for less than 10% of this number. In addition, it was revealed that the PlayStation Plus service had 47.2 million subscribers at the end of September - more than in the second fiscal quarter a year ago, but down slightly from October 2020 to March 2021. PSN, on the other hand, had 104 million users last month (it was 108 million a year ago).

Who's LoL's Most Complex Character? This Chart Provides the Answer

Resident Evil Village Sells Much Faster Than RE7