Today we wrote that Nvidia may be preparing for a war with AMD, and the latest leaks from a reliable source, which is Igor Wallossek from the German website igor'sLAB, seem to confirm that the latter has reasons to be worried. Based on RDNA 2 architecture, AMD Radeon RX 6800XT GPU, which may consume more than 300 watts, according to the same source, will offer higher performance than the competitive GeForce RTX 3080, or at worst, comparable. At least in the 3DMark Firestrike Ultra 4K and Time Spy Extreme 4K benchmarks, as Port Royal 4K (Ray Tracing) test result clearly stands out. 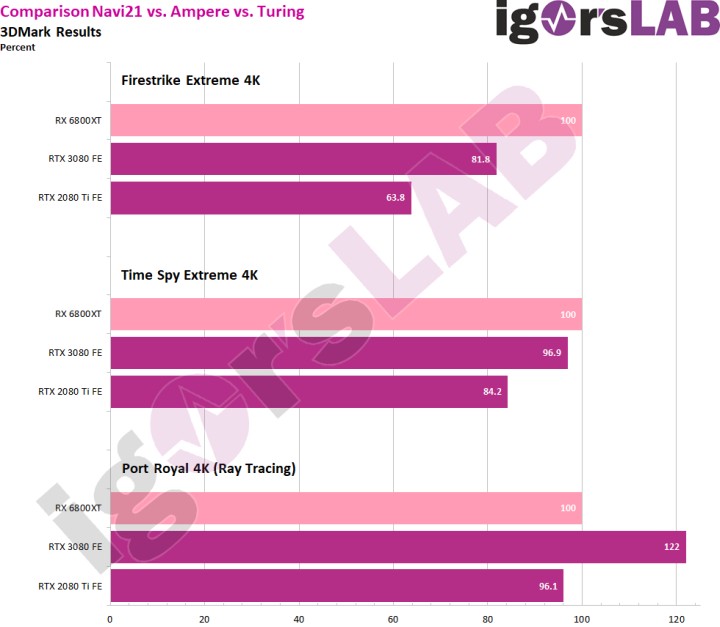 Radeon RX 6800XT achieves a score of 13066 and 8232 points in Firestrike Extreme 4K and Time Spy Extreme benchmarks respectively, which translates into a bigger (about 18%) or smaller (about 3%) advantage over GeForce RTX 3080, which scores 10688 and 7977 points respectively. In Port Royal 4K, the Big Navi loses by 22%. The lower performance of Radeon RX 6000 than GeForce RTX 3000 with ray-tracing would be in line with earlier rumors suggesting that it will be more similar to Turing generation than Ampere in this respect. We would like to remind, that the upcoming chipsets are to be the first ones from AMD which will support ray-tracing, so these results are not surprising. 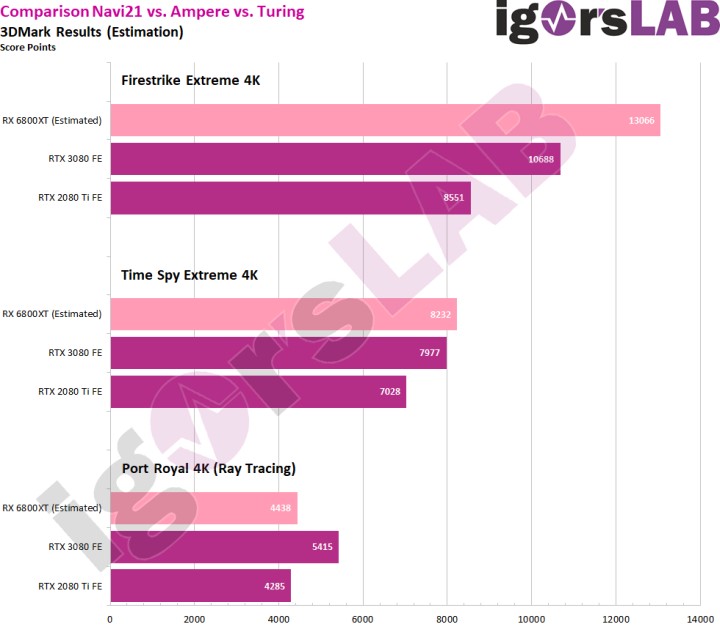 The results of synthetic tests come from two different sources related to the manufacturers of original models. Source: igor'sLab.

Igor Wallossek noted that the results of AMD Radeon RX 6800XT GPU should be taken with a grain of salt, although according to him they are quite reliable. What's important, they coincide to a greater or lesser extent with reports from Wccftech and leaks of from reliable insiders. It's also worth noting that even when the higher performance is confirmed in the benchmarks, it doesn't have to translate into gaming performance.

The official announcement of AMD Radeon RX 6000 will take place on October 28. The launch of the first models in stores should take place in the middle or at the end of November, this year and that's when the discussed reports will be verified by independent reviewers. There is still the issue of availability - AMD does not want to repeat Nvidia's mistakes from the release of RTX 3080, but we still expect difficulties with purchase.