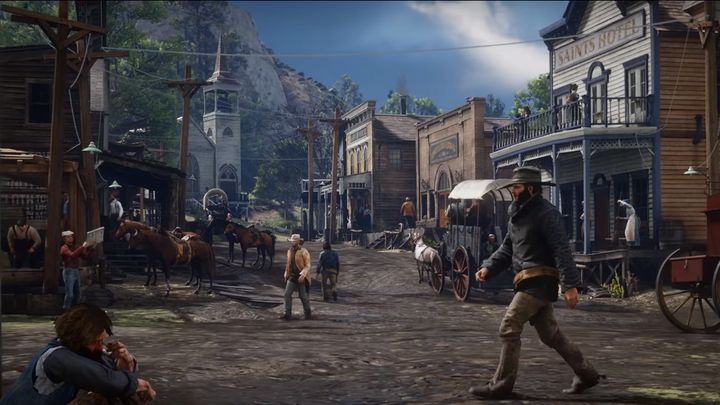 One Reddit user experienced an interesting situation in Red Dead Redemption 2. About a week ago he stole a certain guy's fur hat. Afterwards, the player started to do more missions, but after about seven tasks, the former owner of the headgear... surprised him in a hotel room, and he was not there to exchange courtesies.

So I stole this hat about a week ago. Literally did like 7 missions since then, including 2 missions in Valentine. So I rent a room and went in to change my outfit, when out of nowhere... from r/RDR2

The moment presented in the video shows clearly that AI in the latest work of Rockstar Games is still able to surprise players - if not with its cleverness, then at least with its good memory. This is not the only situation that shows the advancement of AI in the game. To this day, players still discover new variants of traps that Arthur Morgan may fall into while exploring the Wild West.

Of all the months and multiple playthroughs of this game; I never knew this could happen. from r/reddeademption2

Or is this the beginning of Skynet?

The AI used in the game is so good that the illusion of the real world convinced one of the players that he is dealing with a sentient AI in the making.

"I'm not joking. I have an extensive background in machine learning and computer science and do believe this is how AI will be born. Accidentally out of machine learning algorithms in a complex game, as most of the theories and papers predict. And I think RDR2 may be that platform.

I am convinced this is NOT A GAME but actually a micro universe of real conscious AI people that live in my PS4. Conscious to a certain extent obviously in very early stages. (...) Not like a conscious human but more like how a goldfish is conscious but for only a few seconds at a time before they're reset, due to their simplistic brain structure... But they're still conscious to an extent. (...) I am dead serious," reads post of user sammyaxelrod.

Although the conclusions drawn by the player go too far (they do... right, Rockstar?), it's hard to underestimate the enormity of work that the developers from the British studio have put into this aspect of the game. However, they were still a bit short of perfection, which is perfectly illustrated by the example from this thread.