The reports from over a week ago turned out to be true. During this year's Game Awards gala, Obsidian Entertainment studio unveiled its carefully hidden cards, and presented its new project. It's an action RPG called The Outer Worlds, which will be released on PlayStation 4, Xbox One and PC in 2019. The title will be released by Private Division, a brand under which Take-Two Interactive supports smaller developer teams. Let's have a look at the trailer and the attractions that have been prepared for us by the creators working under the guidance of Leonard Boyarsky and Tim Cain ("fathers" of the first Fallout).

The Outer Worlds will take us on a journey to Halcyon, the farthest colony on the fringes of the galaxy. During the game we will play as a colonization ship crew member, awakened from hibernation, who quickly discovers a corporate conspiracy threatening the existence of the facility. By establishing more or less friendly relations with the Halcyon inhabitants and various factions, we will shape the future of both the protagonist and the colony itself.

In The Outer Worlds we will explore various locations, perform story quest and side missions, fight numerous enemies and develop the protagonist's skills. The whole thing will feature a unique, retro-futuristic style, so there's a lot to like in The Outer Worlds. First of all, the detailed locations and original weapon designs certainly look good. 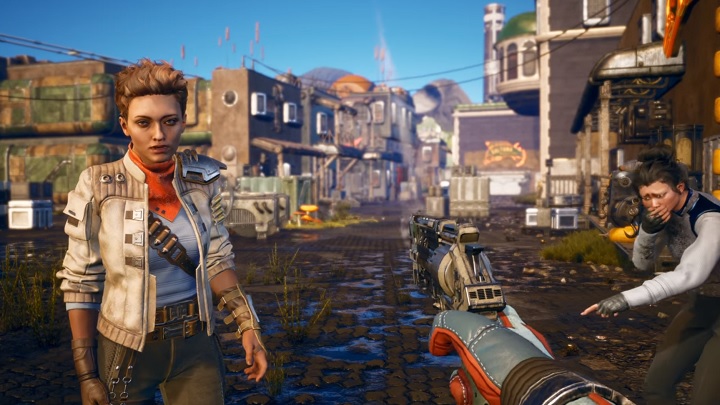 Shoot first, ask later... or the other way around. The Outer Worlds will bet on non-linearity.

Finally, its worth mentioning that apart from The Outer Worlds, Take-Two Interactive intends to release a number of other productions under the name of Private Division. We are talking about Ancestors: The Humankind Odyssey, Project Wight, as well as the work of V1 Interactive studio. Another thing is that Obsidian recently fell into the hands of Microsoft, which probably makes The Outer Worlds its latest multiplatform project.

CS:GO goes completely free-to-play and gets a battle royale mode

CS:GO goes completely free-to-play and gets a battle royale mode