SolarFall Games has released a sizeable video from Umbra, an action RPG designed for PC. It lasts eight minutes and shows how the game fares at this stage of development. The authors emphasize that what we can see is a piece of material recorded while playing the prototype and many things will be subject to change. Still, the video manages to show the overall vision of the game.

The authors released the material as part of a promotional campaign aimed to encourage the players to give financial support to the game through Kickstarter. The minimum goal of the crowdfunder was set at USD 225,000, and the creators have until June 14 to collect that amount. Currently, the counter on the page shows the sum of USD 167,000, so the chances of success are considerable. 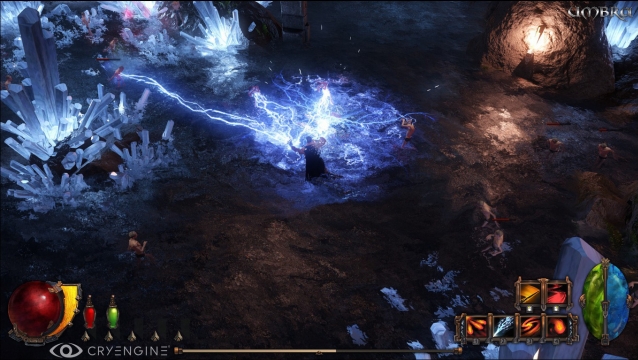 Lets recap: Umbra takes us to a grim fantasy world, where we assume the role of a former army officer of the Human Republic, who was sentenced to death due to his newly developed magical powers, and managed to avoid execution by chance. The hero will join the ranks of Templars, where he will be able to use his unusual talents to fight monsters and uncover the truth about a certain secret that could lead to the extinction of the human species.

During the game we will mostly fight, which will be executed in a manner typical for hack-n-slash RPGs. The authors, however, are also preparing a lot of interesting solutions that are to distinguish the game from its competition. For example, during the campaign the hero's body will undergo mutations as a result of the skills used and the choices made. Subsequently, he will gain additional abilities, for example a third hand that will allow him to carry an extra weapon, or wings enabling long jumps. Whats more, the action is set in a vast world with an open structure, and the game will offer an extensive crafting system, allowing to chose the shape and nature of the individual elements.

Umbra is being built on CryEngine. Currently only the PC version is planned, and the game is due for a release in October next year.