Windows 11 will enable us to run Android apps. Thanks to the integration of the Amazon Appstore with Microsoft's store, installing smartphone apps will be as easy as anything else on Windows. However, since they will run in a special virtualization subsystem (Windows Subsystem for Android - WSA), some concerns about its performance arise - this process generally consumes some computing power. On the Internet we can find the first benchmarks of this feature and they show that the performance of android software in Windows 11 is the same as a on device equipped with Snapdragon 865. 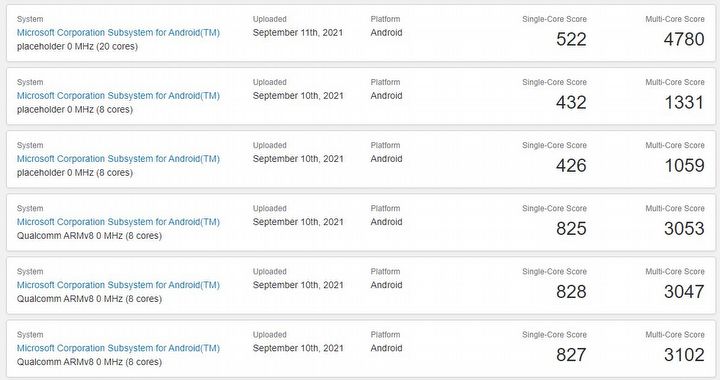 The results of the benchmark were noticed by Twitter user AlurDesign. As you can see in the image above, the results are quite diverse, but calculating the average, we can conclude that it will be quite decent (single-core performance 820 and multi-core performance 3000). The naming of the processors is interesting - in some positions we see Qualcomm, and in others it is unspecified ("placeholder"). The number of cores is also different, and the clocking is not provided ("0 MHz").

Of course, the CPUs name or clocking doesn't matter here anyway, because it's a virtual environment. However, as you can see, the "placeholder" generally coincides with a worse result, which makes you think that the tests with an unspecified CPU might be coming from a different hardware platform or version of the WSA software. Since benchmarks have started to appear on the web, it could mean that Microsoft is preparing the feature for release to Insider program participants. However, the ability to run Android apps on Windows 11 will not appear immediately at the time of the system's release (October 5, 2021). We will have to wait a bit for it, probably until early 2022.