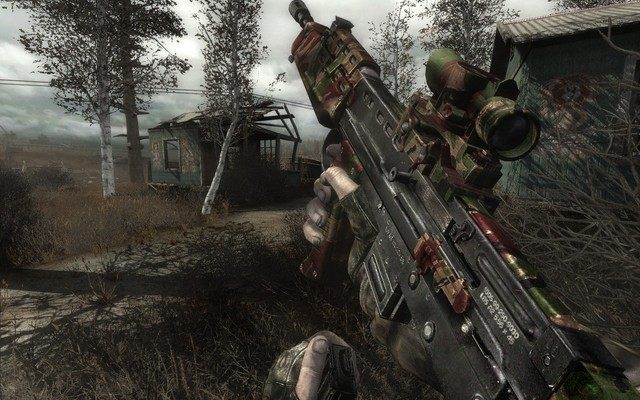 MISERY is a mod for S.T.A.L.K.E.R.: Call of Pripyat, created by Misery Development Ltd.

• People, mutants and birds are ripped apart if not in shelter during emissions.

• Player feels more alive thanks to various sound and movement tweaks, general improvements to interaction during firefights as well as the ability to use consumables and other equipment.

• No weapon restrictions in safe zones.

• New screen shake effects when firing a weapon (resembling recoil shock/shake effects). This effect varies depending on the caliber fired and your choice of USS class.

• Your flashlight does not illuminate your weapon anymore (only when reloading and sprinting),

which makes it easier for your eyes to focus on your surroundings in low-light conditions.

• Unique version of Massive Simulation Overhaul (MSO) that makes NPC behavior more challenging and diverse. It even adds a variety of NPC professions (like Hunters).

• Zombified stalkers are mindless wanderers that attack everything and are killed effectively only with shots to the head, spine or heart.

• Fewer weapons in good condition and less ammo. No more “killing zombies to easily find loads of weapons and ammo”.

• No valuable gifts in your stash after completing quests like “A Friend of Stalkers” or “Mutant Hunter”.

• There are no difficulty settings. There will be MISERY and the mod will present a huge challenge for rookie Stalkers.

• Universal silencer has been removed: you will need the correct sound suppressor variant for your weapon caliber.

• No warnings, task messages or safe-zone indications on PDA before and during emissions (only sirens).

• A more natural day/night rhythm (i.e. without resorting to drugs and other stimulants) is advised if you want to avoid a blurred vision caused by headache or sudden sleepiness.

• Optional hardcore game start: “Chorna Doroha” (The Black Road) in which you start with little to no gear.

• Advanced game progression ensures a challenging gameplay from beginning to end of the game.

• Factions are reacting much faster to your gameplay choices and faction relations.

• All artifacts are harmful unless they are stored in Artifact Containers.

• Bloodsuckers are no longer breathing heavily when invisible (the predators have evolved).

• New background ambience for all areas.

• PDA and Geiger sounds have been redesigned.

• Music in combat situations has been disabled and replaced by fast heart beats.

• All weapon sounds are synchronized to match animations.

• Russian dialogs and voice for immersion.

• Each silencer variant has a unique sound (based on the ammo caliber).

• Breathing sfx implemented and related to your movement speed as well as worn headgear.

• NPCs are unshaven, scarred and tired, while buildings and environment textures are bleak and desaturated.

• Better blood splashes and redesign of color schemes of suits and clothes, including new gloves.

• There is a huge diversity in the amount of corrosion and dirt on the weapons depending on the background of the weapon type.

• New sprint animation for many weapons.

• Unique and edited AtmosFear sky boxes for all weather types.

• Redesigned textures of structure materials for a more gritty and bleak environment.

• New scope designs with authentic reticle designs for all weapons.

• Redesign of several mutant skins, for example the pseudo-giant has a new facial design.

• Unique version of AtmosFear3 with specially designed sky textures, weather behavior as well as sun and god rays. The weather usually cycles between cloudy and more cloudy, so the sky only rarely ‘opens up and breathes’

• Weapons are auto-holstered when using items (like bandages, consumables etc.)

• Logarithmic repair system implemented for enhanced logic in the aspect of repair costs.

• Some zombies have now dropped their weaponry to the ground and walk around just staring at you.

• NPCs can now engage in melee combat and knock you down.

• UI overhaul of all item terminology, units, scales and measurements for in-depth authenticity.

• Dynamic stamina system (there is no longer a maximum weight limit). The lighter you choose to travel, the longer you can run without resting.

• Minimap removed and you must now navigate based on your surroundings and your PDA map.

• Damage indicator added to let you know where shots are coming from.

• NPCs no longer have infinite ammunition for their primary weapons like rifles, shotguns, etc., so you will see them switch to backup weapons (if they have any).

• Mutant hunting mod: provides the possibility to obtain meat and hides from mutants and sell them for scientific or other purposes.

• You can buy mutant meals at the Skadovsk and Jupiter Station.

• Bandages only stop bleeding and do not heal.

• Battery life added as new micro gameplay element that must be managed and handled with a Universal Power Device (UPD).

• Doubled the switch distance ratio to 350 to allow scoped firefights at much longer distances.

• Added head bobbing based on Player movement for immersion. Sprinting causes much more head bobbing as compared to other forms of movement.

• Minimal HUD with no grenade warnings.

• Weapons are configured to correspond with their real models.

• Weapon descriptions have been redefined.

• All weapon descriptions now include a display of possible attachments as well as your USS class weapon proficiency.

• Cleared Stash Mod that puts a small treasure icon on the map in the place where you pick up a stash.

• The Field of View has been widened to better fit high resolutions and expand your view.

• Scopes zoom levels have been tweaked.

• Your aim is wavering to reflect your breathing when aiming through optic scopes.

Your stance influences your aim. Crouch to minimize weapon sway.

Possibility to change your class in the main menu (saves relate to the classes).

• Ammo and weapon prizes tweaked according to availability and Zone popularity.

• You get paid less for artifacts.

• All traders and Stalkers pay you less for everything they buy.

• Medics will now charge you for their services. There are no free meals in the Zone.

• There are 3 playable USS characters classes to choose from: Assaulter, Recon and Sniper.

• Each thus has their own strengths and weaknesses, which ensures a much more dynamic style of gameplay and provides maximum replay value.

• Choose carefully as this will influence your entire playthrough considerably.

• Each class has their own unique main menu design with special musical themes.

• You can have more than one USS class playthrough at the same time thanks to smart class-dependent savegame metadata.

BULLPUP AFFINITY - all bullpup rifles, regardless of type receive a small bonus to sway rates, recoil, aim speed and accuracy

• Vanilla CoP has around 35 weapons, while MISERY 2.0 features 45 new weapons and adds additionally 120 new diversified profiles of existing weapons, which results in a total of 200 unique weapon profiles in the game.

• Some are available in shops, some are used by NPCs, some are hidden in the stashes around the Zone.

• Some of the weapons are unique, meaning that there is only 1 of them in the entire game.

• Attachments are available for all weapons, and vanilla weapons have even more attachments options now.

• Complete overhaul of all weapon conditions and behavior based on real life attributes.

• Weapon Rate of Fire, ammo counts and type, weight and all other attributes are based on real life counterparts.

• Weapon handling is based on the size and weight of the model.

• There is now a silencer variant for each ammo caliber available.

• Redesign of scope visuals to correspond with real life reticles.

• New scripting of recoil (based on ammo caliber).

• Shooting from the hip is unadvised. Recoil of all weapons is now more aggressive so you will need to take proper aim and use the strength of your hands and torso to hit your targets.

• Crouching improves your aim in the most optimal way. If you don’t aim properly, you will suffer from great recoil and weapon sway when using bursts or fully automatic fire.

• Weapon handling/recoil is influenced by your choice of USS specialization.

• Special and unique upgrade trees available for all weapons (not all require tool kits).

• All weapon sights have been aligned for both widescreen and 4:3 monitor resolutions.

• Full version of New Ordnance submod bringing multiple variations of many weapons including worn, modern and camouflaged profiles. All are tradeable, customizable and used by NPCs.

• Weapon upgrade trees now require you to ‘choose a path’ for their customization. You have to weigh their pros and cons, because upgrades can’t be undone.

• Resources and supplies are scarce.

• Some Stalkers have a backup weapon while novices can afford only simple handguns.

• Zombies are lightly armed and have dropped majority of their belongings.

• Dozens of new consumable items added, including military rations, corn, nuts, beers, a range of vodkas and many more.

• All consumables divided into 2 overall categories: *Imported* and *Zone-Produced*.

• A range of knives added with diversified damage fPlayers and appearance.

• USS specialization identity card featured in your inventory (you can’t drop or sell it as it is a key item).

• Dynamic sleeping bag and sleeping pills added. Sleeping bag is unfolded on the ground upon use.

• Thirst added as a fPlayer. Barmen sell clean water that decreases your sleepiness.

• All traders have larger stocks which, moreover, change regularly and expand with game progression.

• All NPCs have unique inventories that are based on their faction, rank, profession and A-life interaction.

• Crows can be hunted and looted just like all other mutants.

• Lots of new mutant parts to collect, including pelts, skins, legs and meat.

• Some stashes are USS class dependent making your next playthrough different from the first.

• Some larger mutants (like pseudogiants) may have valuable items in their stomachs.

• Armour attachments including kevlar plates, artifact containers, Camelbak and many more can make your outfit fit a variety of special purposes and tasks.

• Create your own interactive stash with a waterproof and camouflaged backpack.

• Manual repair of suits and weapons with the use of a large variety of kits and scrap items.

• Mutant hides and pelts can be used for armor enhancement or repair.

• Bonesetter at Yanov Station has expanded his business to include weaponry and survival equipment.

• Headlamp is now a separate equippable and tradeable item that requires batteries to function.

• Explosive items with a variety of attributes added. Some are more effective, some are improvised while some have delayed explosion, etc.

• NPCs will react to a dead or wounded body in different ways but all will enter a new danger reaction mode.

• If you support a faction, the opposing faction will spawn veteran units to hunt you down.

• Relations tweaked. Stalkers/Bandits no longer turn neutral to each other.

• Re-spawns in freeplay mode (more alternatives of spawns in Zaton and Jupiter).

• You will see some rookies equipped only with a standard pistol and a few rounds whereas veterans have quality weaponry.

• All NPCs carry a small amount of more expensive ammunition required for their objectives and survival.

• NPCs might carry valuable food that they won’t sell or trade with you.

• NPCs may surrender to you during combat if you defeat them without killing them.

• NPCs may reveal their personal stash to you upon surrendering.

• NPCs are now far more challenging and have varied approaches to firefights based on their faction, rank and weaponry.

• Cat mutant – a deadly predator that will hide in the high grass to take you by surprise – added to the game.

• MSO (Massive Simulation Overhaul) fully implemented in an expanded form: hundreds of new smart terrains and alternate spawn points for both mutants and factions in all areas/maps.

• Monolith soldiers may commit suicide if defeated or badly wounded.

• AI tweaks due to adding metadata to some sounds (for example related to tushkano).

• Range of the combat knife has been increased.

• Oasis artifact will no longer reduce your hunger but it has better healing properties. It is also highly radioactive.

• Pistol degradation (in vanilla, some pistols stopped degrading if you installed all upgrades).

• The three burers in X8's “secret floor” can now be killed from outside the room they are in.