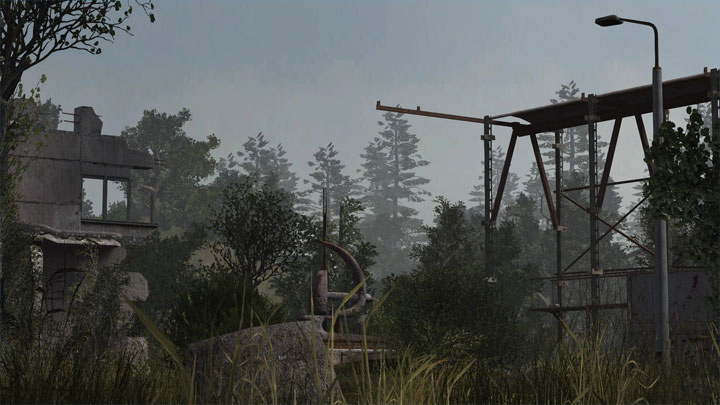 S.T.A.L.K.E.R. Anomaly is a standalone S.T.A.L.K.E.R. mod powered by an x64 version of the X-Ray engine. Starting with version 1.5.0 Anomaly uses a custom engine build called the XRay-Monolith engine. After almost one year of development of the Anomaly 1.5.0 update, the mod continues its way on expanding and adding new features while maintaining a high level of quality and replay value.

"Lost to the Zone" Storylines has been added to 1.5 update, with its three installations:

Part 1: Living Legend: a famous stalker has returned to the Zone. Pursue him in order to obtain his invaluable knowledge.

Part 2: Mortal Sin: a sinister faction emerges from obscurity to take over the Zone. You are among the few who can stop them.

Part 3: Operation Afterglow: the Zone attracts a lot of attention. However, some people believe that its many secrets are best kept hidden.

And the new bonus story:

Part 4: Hollow Boundaries: play as a member of a foreign force to investigate and reveal the secrets of the Zone.

Additionally, you're free to assist your faction and complete their questlines (DRX).

The majority of quests will offer info about your targets before accepting, in addition to new types of quests to keep the player busy.

Every stage of the storylines will unlock a bonus faction for the player. A new set of achievements have been added to game as well.

Every single level has been reworked to help convey the feeling of an overgrown, relatively undisturbed Zone.

The weather system is improved and expanded to offer variety and atmospheric feel. In addition to the new Weather Editor, offering an interactive GUI and the ability to create, modify and save weather presets. Weather changes can be done and seen in real-time at no cost.

Shaders and visual effects have received major improvements, such as the new gasmask with nice refractions, cracks react to light and raindrops. In addition to better tonemapping, water reflections, new wet surface/

The A-Life received major changes. For a start, stalkers travel more frequently and report their activity in the other parts of the Zone.

The Zone is constantly changing, so are the anomalies and mutants. Dynamic world items are everywhere around you, even in places you might not expect. Each playthrough will carry something different for you to look for. Explore the Zone, and you might find something nice during your journey.

Special characters and common stalkers offer more unique tasks, along with expanded dialogue. Stalkers can sell and buy items from traders, or even visit local mechanics to upgrade their favorite weapons. In addition: Loners, Mercs and a few others can offer escort services for a fee. Many special characters also have connections around the Zone: you can offer them a payment to bribe an enemy faction, temporarily preventing them from attacking on sight.

The disguise system has improved. Your equipment and behaviour affects the way stalkers observe and remember you.

Your rank and reputation counts. Exceptionally high or low values respectively will attract attention, possibly even from your enemies...

Warfare has become a part of Anomaly as an optional mode. It simulates conflict between different factions in a dynamic fashion.

With an offline combat simulator, squads can intercept other squads arbitrarily, so the zone will be much more dynamic and the large scale war will rage at the far corners of the map.

A special PDA tab is added for Warfare mode, allowing the player to track the progress of each faction in the Zone.

The inventory has been expanded with more item slots.

A lot of changes have been done to the item system: all devices operate by their own batteries, and you can swap batteries between devices.

Backpacks are essential and increase your carry weight while equipped. Bolts - a vital tool for traversing anomaly fields that we often take for granted - are also limited when playing on the hardest difficulty.

The outfits and weapons list is reworked with more unique stats and properties. Weapons scopes and sights have received a big rework, in addition to new animation effects and the ammo wheel: a simple GUI to change ammo type quickly.

PDAs found on corpses can be viewed by the player to dig up the messages inside. Messages related to the dead stalker can be about anything, search for any important info you can find.

A new set of headlamps and PDAs with special features are available. Additionally, 3 new detectors are added for quests and general-usage:

The Geiger Counter is now a detector with its own model, showing the rad amount on its screen along with a keybind to show the value on the HUD.

The RF Receiver is able to catch signals coming from different radio sources. Along with the Anomaly Measurement device, both are used for different type of quests.

This is a standalone project. Just unpack to new folder and run the launcher.