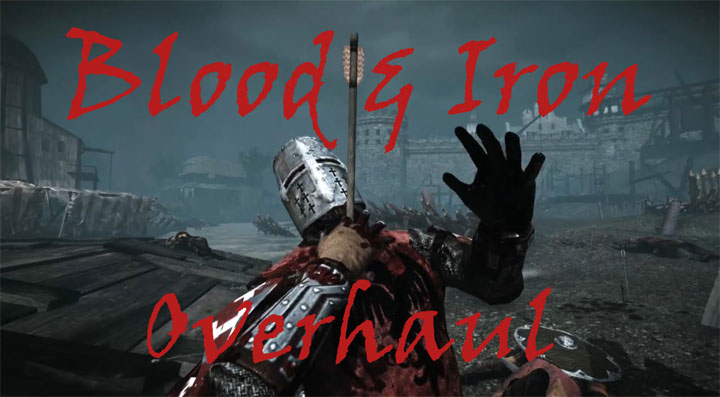 Blood and Iron Overhaul is a mod for Kingdom Come: Deliverance, created by AJStoner.

This mod is my attempt to create a comprehensive game play overhaul for Kingdom Come Deliverance that maximizes depth and difficulty. It contains most of my previous mods as well as a great deal of new material in a single package. Blood and Iron is harsher than most other mods for KCD. It will make early game play much more difficult and keep it challenging throughout so it is recommended for those who have already completed a play-through and developed some skill with it.

*No exclusive perks; combine contradicting perks to create new ones

*Polearms can be purchased from all blacksmiths

*Polearms can be stored in the player's invantory

*Polearms are much more common than in the vanilla game

(A stand-alone version of these horse armors can be found HERE?)

*Merchants have twice the available funds

*Stay clean longer after washing or visiting a bath house

*Sneaking is harder in heavier armor

*Serious injuries (limb damage, etc) take MUCH longer to heal on their own

*Transparent compass easily visible during the day or night

*Hide/Show HUD using the 8 and 9 keys

*No fog of war on main map

*No visor overlay in combat

*No sharpen vision effect when drunk

*No motion blur (can be restored in user.cfg if you want it)

*No windshield blood splatter on screen

*Added toggle in user.cfg to Enable Fog in game

*Added toggle in user.cfg to turn off Slow Motion effect during perfect block

(A stand-alone version of this interface can be found HERE?)

*Player position not shown on map

*If you do not already ahve one, create a new folder in your KCD game folder called "Mods"

*Place the folder named "zzz_Blood and Iron Overhaul_WI_1.3" inside in your Mods folder